Yellowjacket is from the Yost Universe series The Avengers: Earth's Mightiest Heroes.

Henry "Hank" Pym is a scientist and founding member of the Avengers. He has gone by the names Ant-Man, Giant Man, and Yellowjacket.

Hank Pym is a scientist who invented Pym Particles, a subatomic substance which allows him to both shrink himself to the size of an ant and expand his body to the size of a skyscraper. He usually goes with a diplomatic method of settling things, but will fight if need be. He serves as the team's strategist and tactician.He is also responsible for creating the Pym Particles. He is also well known for his relationship with Janet "Jan" Van Dyne, also known as Wasp. Many episodes show their relationship progress. He can communicate with many insects such as ants, termites, etc. 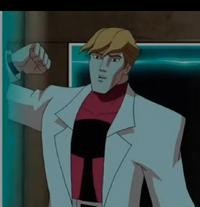 He created the Ultron synthezoids, the last of which turned against the Avengers and tried to kill them. His technology was stolen by Scott Lang who took on his superhero name. He hired the Heroes for Hire members Luke Cage and Iron Fist to track Lang down but let him keep the technology.

After Hank Pym left the Avengers, he had been in a state of disorder before being visited by Iron Man and Wasp. When they came to him, he showed them his micro-prison. He quickly got angry at the two and told them to get out of his lab immediately. After the two left, he triggered an explosion to fake his death.

Hank became Yellowjacket and took matters into his own hands with supervillains. He took down the Serpent Society by blasting them with his gun and putting them in his micro-prison. He was pursed by Captain America and Black Panther, who told him they could take the supervillain he was facing at the time. He blasted the villain and began to fight the two. He stopped fighting when he saw Wasp.

He was unmasked by Wasp during their next encounter. He had a stand off with some of the Avengers before his gun was knocked out of his hand, it exploded and they were all caught in the explosion. Hank revealed to them that he had been using his weapon as a way to keep the Serpent Society captive.

When the gun took he and the Avengers into the destablized micro-prison, he used his intellect to save them. After they were out, Hank told them Ant-Man was no more and from that point on, he was Yellowjacket. He was allowed back on the team thanks to Wasp persuading Iron Man.

When the Kree tried to destroy the sun, Yellowjacket stayed at Hydro-Base while the other Avengers went into space. When they tried to free Ronan the Accuser, he stopped them. Abigail Brand informed him that Yellowjacket needed to defuse the Kree explosive, forcing him to retreat. He gave up on trying to disarm the Kree explosive, and shrunk it into the Microverse, where it detonates but harms very little, at that scale. Hank later revealed to Brand that he was merely making fun of her during the bomb diffusion, which earned him a sucker punch from her.

Through the use of Pym Particles and a device fitted into his super suit, Hank Pym is able to shrink himself down or enlarge his size. At a reduced size, he retains both his human sized strength and voice. While reduced in size, Hank typically rides a winged ant or is carried by Wasp to travel. This size has often been considered inferior to his Giant-Man form, but Hank has used it time and time again to great effect. The downside to this form is that Hank could be squished much more easily by foes. He is called Ant-Man in this form. At increased sizes, Hank possesses superhuman strength, though it is almost inferior to both Thor and the Hulk. He is strong enough to lift enormous object and throw them incredible distances with surprising force, and was able to kick and fight the Abomination and throw him several feet away, and was also able to knock out the Asgardian Skurge the Executioner by smashing him under his hand. The downside to this form, as demonstrated in the test battle against Black Panther, is that Hank's larger body is a far bigger target than he is normally, and his pressure points are also larger and causes greater pain. While increased in size, Hank is known as Giant-Man, though he is mostly just called Hank by the other Avengers.

The suit he wears acts as conduit for his Pym Particles with his powers being activating by the device on it's belt.

Through the use of his Ant-Man Helmet, Hank is able to communicate with ants. He can use the helmet to summon them from wherever they are, and can use it to command them to attack or surround enemies. Hank typically uses the insects as a binding force or to enter machines and disable them.

His helmet emits sonic frequencies which Hank can manipulation manually, which are most often used to speak to insect-life and have them help him and the Avengers diffuse opponents, but as the frequencies are variable, it can be used as a weapon against opponents weak to certain sonic frequencies.

Unlike his fellow Avengers, Hank preferred a more logical way to deal with villains. He had sympathy and saw potential in villains, such as Whirlwind, and preferred to use violence only as a last resort. Hank was noted for being a pacifist, something none of the Avengers were. He was surprised by Wasp's liking of fighting and beating supervillains.

After he became Yellowjacket, his tone of dealing with villains changed. He was now more violent, such as punching several members of the Serpent Society in the face.

He seems to have a personality disorder due to being isolated and became crazy inside his lab for many weeks without proper sleep or food besides pizza as Iron Man noticed in his messy lab, which made him think that he's Yellowjacket and Hank is another person.

Aside from his superhuman abilities, Hank is an incredibly gifted scientist, having developed the Pym Particles that gave both himself and Janet van Dyne their powers. He also created the Ant-Man Helmet, and is a professor at the university. He is often considered dangerous for this intelligence, but is also noted as "boring" by Janet.

Wasp is Ant-Man's assistant at the university where he works, despite finding much of his work boring. In a bid for some excitement, and possibly to get Hank's attention, Wasp left to battle Whirlwind, eventually drawing Ant-Man's attention and assistance in defeating against Whirlwind. Not long after, Wasp and Ant-Man attempted to contain the villains confined in the Big House. Then after a fierce battle with the supervillain Graviton, they became two of The Avengers five founding members. Through the fights and adventures Hank and Janet have grown to love each other more and more. While they are still interested in each other, they are never shown to be openly romantically involved. Eventually, Hank admits to Wasp's unconscious form that he loves her before growing to his Giant-Man form and charging three Frost Giants to protect her.

Ultron was Pym's greatest creation and failure. Based on Pym's own brainwaves, he was created to contain and hopefully rehabilitate the prisoners of the Big House. However during Kang the Conqueror's siege, the Avengers found it necessary to have Ant-Man reprogram the army of Ultron androids for combat against Kang's forces. Afterwards Ultron's programming convinced itself that its ultimate purpose was the destruction of all life on earth to restore "peace and order." This forced Ant-Man to deactivate Ultron. Ultron's corruption deeply scarred Ant-Man's psyche and was a large part of the reason he left Avengers.

Hank and Janet were actually married, however, their marriage eventually fell apart due to Hank becoming mentally ill. It came to a point where he started abusing Janet and thinking irrationally. This ultimately led him to being removed from the Avengers.

Retrieved from "https://marvelanimated.fandom.com/wiki/Yellowjacket_(Yost_Universe)?oldid=71511"
Community content is available under CC-BY-SA unless otherwise noted.