Yancy Street Gang is a small-time street gang operating in New York City. The members are known as Yancy Streeters.

Nothing is known about this street gang or its members. 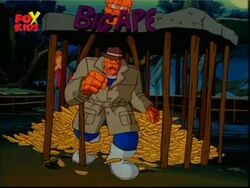 They are known for pranking Thing. The reason of their attitude towards him is unknown. After he fell out with his girlfriend, Alicia Masters, they tricked him into coming to Bronx Zoo where they trapped him in a wooden cage with "Big Ape" sign and dumped bananas there. When Thing freed himself, he tried to pummel the gang's members but instead he was attacked by Ogress. After Thing's fight with Ogress and other Gamma Warriors the Yancy Street Gang distributed leaflets marked "THING WHUPPED BY A WOMAN!!" from a passing airplane, much to Thing's chagrin.

This is unknown if they ever changed their attitude towards Thing or not.

The gang is only seen in shadow and no member is specified. No voice actors were credited.

When he was young, Ben Grimm lead the gang. Several members who were in the gang with him resent him for leaving to pursue higher education and better standard of living.

They are a group of youths who spend their time playing mostly harmless pranks on Thing. As time goes on and the streeters grow older they recruit other youths into the gang. This is largely to avoid the children from going into other gangs where they perform illegal activities.

They have often helped the Fantastic Four fight supervillains. They will also help Thing with a problematic villain noting "That's our job" to give Thing trouble.

Spider-Man has helped the gang out.

Retrieved from "https://marvelanimated.fandom.com/wiki/Yancy_Street_Gang?oldid=89827"
Community content is available under CC-BY-SA unless otherwise noted.