The World Trade Center is a series of buildings in New York City.

The World Trade Center is most recognizable by the Twin Towers, which are the tallest in the city rising above the Chrysler Building, Baxter Building, and Four Freedoms Plaza. 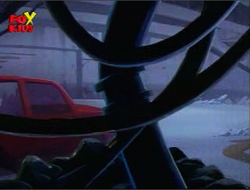 At one point, terrorists placed a bomb in the building attempting to blow it up. However, they were unsuccessful.

When Spider-Man became Man Spider he kidnapped Punisher and took him to a "nest" in the garage that was damaged by the bomb. Kraven the Hunter managed to smell bomb residue in Man Spider's webbing and tracked him to the garage. He found Punisher and the two attacked Man Spider. They then used a serum developed by Mariah Crawford to return the webslinger to his normal self.

The bombing was a real attack that happened on February 26, 1993, two years before the airing of "Duel of the Hunters", to the real World Trade Center. 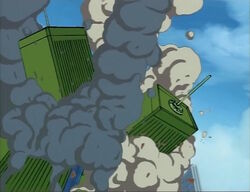 On September 11, 2001 terrorists hijaked airplanes, flew two into the Twin Towers destroying them, and murdering about three thousand people. Out of respect for those killed, Kraven's explanation in "Duel of the Hunters" was removed and it was changed to simply an anonymous garage. Though it creates confusion as to how Kraven was able to track Man Spider. It is a sad coincidence that the destruction of the towers in "Incursion of the Skrulls" mirrors what actually happened.