Wong is the assistant to and good friend of Doctor Strange.

The early life of Wong is unknown.

After learning from The Ancient One, Doctor Strange made Wong his assistant. Wong studied the mystic ways under Strange and together the two protected the Wand of Watoomb in the Sanctum Sanctorum in New York City.

The interdimensional being Dormammu asked Baron Mordo, rival to Doctor Strange, to obtain the Wand. Mordo had amassed a cult of various brainwashed people. He sent the cult to the Sanctorum to retrieve the Wand.

Wong was the first to defend it against Mordo's cult members. Wong was later assisted by the superhero Spider-Man, who was following the flying cult members, and Doctor Strange. The three fought them off and the cult retreated. Spider-Man left to follow.

Wong was then told of Doctor Strange's history with Baron Mordo. Wong learned that Strange was a gifted surgeon who was in an accident, losing the use of his hands. He traveled the world and found The Ancient One. When Mordo tried to kill The Ancient One, Strange tried to stop him. The Ancient One was grateful to Strange and agreed to train him in magic. 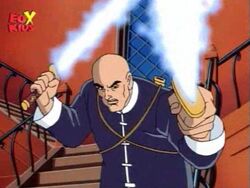 Wong, Doctor Strange, and Spider-Man teamed up and attacked the cult's headquarters in order to get the Wand back. They needed to stop Mordo could release Dormammu into their world.

Wong and Spider-Man distracted the cult members while Doctor Strange went to find Mordo and the Wand. When Doctor Strange began to be overwhelmed Spider-Man was about to step in but Wong stopped him telling him that it was Strange's battle to fight alone.

Eventually Spider-Man entered into the portal that Mordo had opened and Strange did beat the baron. Strange followed telling Wong to protect the portal. Wong did so until the two came out.

When the building began to collapse the three heroes along with formerly brainwashed cult member Mary Jane Watson escaped. Having saved the day Spider-Man left with Mary Jane. Doctor Strange was talking to Wong when he was startled by the sudden and overwhelming presence of Madame Web.

Wong commands limited magic abilities. His physical prowess is enough to wield two swords while fight several men at once. Wong was able to combine the two and magically enhance his swords.

Wong was voiced by George Takei.

First animated version of the character, and second outside the comics.

Wong cannot use any magic without the help of Doctor Strange.