Wolverine is from the Non MAU episode "Pryde of the X-Men".

Wolverine is an Australian mutant who is part of the X-Men.

Wolverine was found by Professor X and became an X-Man along with Cyclops, Colossus, Storm, Dazzler, and Nightcrawler.

He and the others were training in the Danger Room when Kitty Pryde entered the Xavier Mansion.When they were finished Xavier asked the team to come up and meet her. 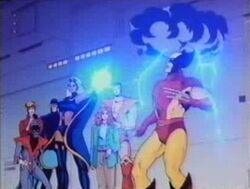 Nightcrawler was the first, but his appearance frightened the newcomer and she phased through the controls into the Danger Room. She is caught by Colossus and comforted by the others, except Wolverine. It seemed he did not feel the young girl was up to being an X-Man.

The X-Men arrived back at the mansion and pulled Xavier out from under a pile of rubble. Kitty woke up to find Nightcrawler staring down at her. She freaked out but was comforted by Dazzler. Kitty got into an argument with Wolverine before she wondered where Xavier was. Xavier showed that he was alright. 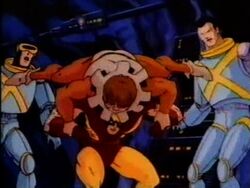 The X-Men encountered Pyro so Dazzler decided to take him on. The X-Men go on without her until Toad surprises and attacks Wolverine. The other X-Men continued on.

Xavier kept the Blackbird on a viewscreen that Nightcrawler could see. Xavier told him that he must teleported aboard at the very last second. Unfortunately Nightcrawler waited too long and the comet hit the asteroid.

Wolverine has razor sharp adamantium claws. He has heightened senses that he uses for tracking. Cyclops asked him to help them track Magneto when they entered Asteroid M.

Though unmentioned, he has a healing factor which allows him to heal after he retracts his claws.

Wolverine is voiced by Patrick Pinney.

Wolverine's much derided Australian accent seemed to derive from a brief run-through of the script in which Wolverine mockingly calls Pyro, who in the comics hails from Australia, a dingo. Although in the actual episode he doesn't call Pyro anything, he says the word to Toad. Wolverine's appearance on Spider-Man and His Amazing Friends had the same change. In a statement made in the book X-Men: The Characters and Their Universe, Rick Holberg stated:

I ended up being the voice director on the show, and I was forced to use the Australian version of Wolverine (which coincidentally, foreshadowed the casting of Australian actor Hugh Jackman in the live-action X-Men film), because all of this Australian stuff was popular at the time - the Mad Max films, "Crocodile" Dundee, and so on - it was going to turn out (in the comics) that Wolverine was an expatriated Australian. The direction of the character however never got beyond the plotting stages and Wolverine remained Canadian in the comics.

Retrieved from "https://marvelanimated.fandom.com/wiki/Wolverine_(Pryde_of_the_X-Men)?oldid=99713"
Community content is available under CC-BY-SA unless otherwise noted.