Winter Soldier is from the Yost Universe series The Avengers: Earth's Mightiest Heroes.

Bucky was the sidekick of Captain America and member of the Howling Commandos during World War II. He later returned as Winter Soldier. 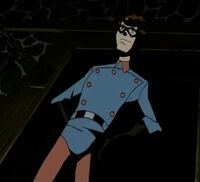 Little is known about the early life of James Barnes. But, at some point, he took the identity of Bucky and became the sidekick of Captain America.

In 1943, Bucky helped Captain America to get inside the Red Skull's fortress in Norway. After the two American allies defeated the HYDRA goons, Bucky and Captain America pursued the Red Skull in his rocket ship, but the Red Skull got away and set the rocket to blow in thirty seconds. As Bucky got his leg stuck to the ladder, Rogers tried to free him from the bars, but Bucky said the world needs Captain America more than Bucky, and so he knocked him off the rocket and into the frozen water to save him before he died in the explosion in tragedy whilst saluting farewell.

When Captain America and Baron Strucker touched the Cosmic Cube in the twenty-first century, Captain America unknowingly changed reality to make it so Bucky survived the explosion.

He lost an arm in the explosion and was later found by the Red Skull and HYDRA. He was brainwashed and given a robotic arm. Red Skull trained him and sent him on many missions. One such mission was to attack Nick Fury's group when they blew up a HYDRA base. He took out the team except for Fury, and got out of there before the explosion that took Fury's left eye. Between missions, they put him into hibernation so he wouldn't age and left his honed combat skills intact.

Creation of the Red Hulk

He snuck onto the S.H.I.E.L.D. Helicarrier, and stole the sample of the Hulk's blood. Then he injected it into the willing General Thaddeus Ross, who changed into the Red Hulk. Later, he went to Washington, D.C. where he met up with Secretary of Defense Dell Rusk, along with Falcon, Doc Samson, and Red Hulk.

When a virus affected people outside of the Avengers Mansion, Winter Soldier, along with Doc Samson and Falcon, attacked the Avengers. Doc Samson and Falcon were defeated, but Winter Soldier managed to capture Captain America and take him to Dell Rusk, who was revealed to have been the Red Skull. Bucky cured Captain America of the virus and later fled.

After Bucky came out of his mind control, he found out about the Sleepers and started to locate and destroy them to take revenge on what Skull had done to him. Steve had suspicions on who Winter Soldier was and asked Nick to help him out, but he had a dislike against it because of what he did to his team while he was still under the Red Skull's control.

After Red Skull broke out of prison and Captain America and Fury encountered Sleeper that they helped Bucky destroy, Steve called Bucky by his name. He ended up attacking Fury while Captain America tried to continuously talk to him, to which Bucky showed his anger at him when he thought he'd left him behind. He then told of what Red Skull had done to him and helped to fight him in his Mega-Sleeper. After it was destroyed, Steve asked him to come back and set his past right with the Avengers, but Bucky stated he had to clear up the wreckage of his past alone and disappeared after he blew up the wreckage of the Mega Sleeper. He then told Steve "Tenfold, Cap. Bucky out."

During the Galactus invasion, the Winter Soldier was brought in as a weapon specialist and fought with the team to battle the Fire element of Galactus' Heralds, Firelord.

He and the other heroes left for the Avengers to be praised as Earth's Mightiest Heroes by the people.

He is a true believer in Captain America and is quite a patriot. He usually makes jokes on opponents like the time he made a joke about Baron Strucker about his "hair issue" being bald and all, which angers Strucker.

As Winter Soldier, he is somehow cold and emotionless person as he took orders from Dell Rusk without hesitation or question. After breaking control, he restored his friendship with Cap but retained his impulsive side.

He is a skilled fighter and a specialist under US military training with no need of powers. He is able to hold his own in battle with or without Captain America.

After his transformation into the Winter Soldier he gained enhanced capabilities, similar to Captain America. He also gained advanced superhuman strength from his cybernetic arm.

Besides using his honed hand-to-hand combat abilities, Bucky sometimes uses weapons to defeat other tougher opponents if necessary as he used one of HYDRA's machine pistols on a group of HYDRA troops and used Strucker's sword to cut the wirings connecting to the machine.

Being Winter Soldier, he has a wide array of high-tech weapons and gear, including his bionic arm, at his disposal to accomplish his any assigned even the most dangerous missions with ease.

The first adapted version of the character to become Winter Soldier.

Bucky's full name is James Buchanan Barnes, but this was not stated in the series.

Retrieved from "https://marvelanimated.fandom.com/wiki/Winter_Soldier_(Yost_Universe)?oldid=52427"
Community content is available under CC-BY-SA unless otherwise noted.