The White House is the official residence and principal workplace of the President of the United States of America. The term "White House" is sometimes used for the actions of the executive branch of the government.

There is a large fountain in the back of the building.

The president works in a round room called the Oval Office.

The Unnamed Female President would work out there while conducting business.

This was where Henry Peter Gyrich was informed that his mutant registration program was getting its funding cut off.

The White House, meaning the President and others, ordered Admiral Harold Younger to bring Stark Enterprises in on Operation Prometheus. 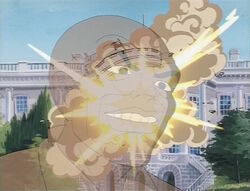 Using his neurokinetic clay, Puppet Master intended to destroy the White House along with other important government buildings.

Retrieved from "https://marvelanimated.fandom.com/wiki/White_House?oldid=57950"
Community content is available under CC-BY-SA unless otherwise noted.