Whirlwind was a supervillain who was recruited by the Mandarin to be one of his minions.

Whirlwind faced off against Iron Man and Force Works many times until the Mandarin was seemingly destroyed. When the Mandarin returned, he re-recruited Whirlwind, Blacklash, Blizzard, and Hypnotia, who are given exo-armors in their fight against Iron Man and Force Works. He and the other villains were later used to help Mandarin power the Heart of Darkness only for it to be thwarted by Iron Man. He and the other villains ended up in jail after that. 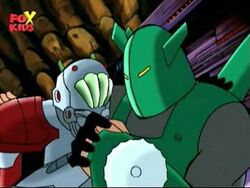 Whirlwind then found a new boss in Baron Zemo, who recruited him into the Masters of Evil along Tiger Shark, Boomerang, Absorbing Man, Cardinal, Dragonfly and Moonstone.

Whirlwind can spin his body at superhuman speeds and create powerful wind currents. This allows him to push through walls and even fly.

Whirlwind was voiced by James Avery and Dorian Harewood on Iron Man and Peter Windrem on The Avengers: United They Stand.

In the Marvel Comics

His real name is David Cannon.

Whirlwind is a mutant, but this is not stated in either series.

Whirlwind was the archenemy of the Avengers member Ant-Man, not Iron Man, though he did fight Shellhead during the Heroes Reborn Iron Man series.

Retrieved from "https://marvelanimated.fandom.com/wiki/Whirlwind?oldid=52082"
Community content is available under CC-BY-SA unless otherwise noted.