Janet Pym (née van Dyne), also known as Wasp, is a superhero and a founding member of the Avengers. She is married to team leader Hank Pym. 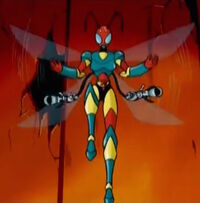 At some point she met Hank Pym and the two married. They became superheroes, each using his Pym Particles to change their size. They eventually formed the Avengers along with Iron Man, Captain America, and Thor. They were based out of the Avengers Mansion.

The new team was eventually attacked by Vision, the creation of Ultron who was the creation of Hank. Vision put Wonder Man into a coma. Vision was reprogrammed and became a member of the team.

Simon eventually woke up and the team spent their time saving the day.

Some time later, the team expanded to include Captain America and Iron Man again as well as She-Hulk, Goliath, Darkhawk, Speedball, Justice, Hercules, and Rage.

When Ego's powers were damaging Earth, the Avengers responded by helping to save New York City. They were joined by the Fantastic Four. They saw that the sky appeared to be on fire.

The Fantastic Four went into space and joined former Avenger Thor as well as Galactus in stopping Ego and saving Earth.

Wasp was voiced by Linda Ballantyne on The Avengers: United They Stand. On Fantastic Four her appearance was an unspeaking cameo.

Was a socialite before being a superhero. Early in her hero career, she tried to get the attention of Hank by flirting with other heroes such as Thor.

It was Janet who thought of the name Avengers.

In her civilian identity, she works as a fashion designer and is known for constantly changing her superhero costume.

Was kidnapped by Hank after he developed schizophrenia and took on the name Yellowjacket. Afterwards, they agreed to get married.

Hank eventually became abusive when Janet became more financially successful than him. When he tried to stop Ultron by himself and failed he struck Janet. He was then kicked out of the team and Janet divorced him.

Led the Avengers. It was under her command that they found Jean Grey after she was thought dead as the Phoenix.

Had a romantic relationship with Hawkeye and used the Pym Particles so he could become Goliath.