War Machine is from the Yost Universe series The Avengers: Earth's Mightiest Heroes.

James Rhodes, also called Rhodey, is a close friend of Tony Stark who fights crime as War Machine. He is a member of the New Avengers.

However, Tony's actions caused Rhodey to grow alarmed. He felt that he was doing work that S.H.I.E.L.D. should be doing. Though Tony got out of the weapons business, Rhodey felt at the very least Tony should help the Hulkbusters as they tried to stop the Hulk. But Tony largely ignored Rhodey's requests and continued fighting crime alone.

One day Tony went off to fight a giant robot in California. After he came back Rhodey asked to speak with Tony. Tony picked him up in his car and they drove down the freeway to Stark Tower. While driving they watched the news report on Tony's car's television. 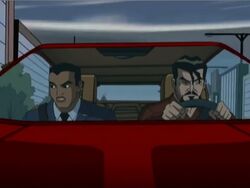 After the report was over Rhodey turned the television off. He was upset that Tony did not mention the robot. Tony then began to brag that the robot was bigger than it appeared in the footage. However, Rhodey saw that as proving his point. He thought Tony was fighting S.H.I.E.L.D. who were just trying to help as he was. Tony saw it as improving his image.

Tony then gunned the engine and passed a semi truck. Tony got tired of talking about the same thing once again. Rhodey reiterated that he should help the Hulkbusters. Tony then jokingly said that the giant robot was more entertaining than Rhodey. Tony then sped forward towards Stark Tower.

Tony pulled into the garage and the two got out of the car. Pepper was waiting for them. Tony approached her and jokingly said that she didn't need to park the car as they had valets for that. Tony asked what was wrong and she told him that HYDRA had attacked the United Nations and she had been trying to call Tony for the last twenty minutes.

They went to his office to watch the news. They watched as a large HYDRA Octopus Robot left the East River and attacked the UN building. It opened the bottom and released a group of HYDRA soldiers. Tony turned it off and moved the large painting down to cover the television.

Tony asked where S.H.I.E.L.D. was and Pepper told him that they were forty minutes away. She then revealed that the UN was in full assembly and had every world leader including the President of the United States of America. Tony then turned to leave. Rhodey asked where he was going and Tony told Pepper to reschedule his lunch meeting.

He then left to don the Mark VI and fly to the UN.

After Iron Man left the building Rhodey radioed in and told him to be careful. Tony said he wasn't going to start then and claimed it would only take him ten or fifteen minutes.

During the battle, Rhodey comforted Pepper and had told her that she should not have any concern about his armor, However, she replied through stating that she is not concerned about the armor and that she is concerned about Tony and understands that Tony has to individually defeat his foes as Iron Man.

During the time that Tony had returned into the armory and had removed his armor, Rhodey had stated to Tony that he is unable to do this all alone and that Iron Man has to have help. However, Tony almost doesn't believe him of what he had spoken about and exits his Iron Man armory.

Rhodey, Captain America, and Black Panther were transferring the armory from Stark Industries into the Avengers Mansion, but they were interrupted when they were ambushed by the A.I.M. agents. While Captain America and Black Panther were protecting the Iron Man armory from A.I.M. who had arrived in order to steal them for their new weapons, Rhodey equipped his War Machine armor in order to defeat the agents. They entered into the Arc Reactor where Iron Man arrived equipped with his Mark IX armor in order to defeat the A.I.M agents and destroy Technovore.

War Machine formed the New Avengers with Spider-Man, Luke Cage, Iron Fist, and Thing after they had listened to Tony's message that is about the Avengers being destroyed and the formation of the team. War Machine had agreed to form the group in order to defeat Kang. During their first battle with the time traveler, War Machine attempted to blast Kang with his repulsor mini-gun and missiles, but they were defeated by the time-traveling conqueror and forced to retreat. War Machine volunteered to lure Kang out of Stark Industries and distract him long enough for Spider-Man to be able to sabotage his time machine.

During the time that Galactus and his had invaded Earth with the intentions of eating the planet, War Machine assisted the Avengers through fighting one of Heralds of Galactus named Terrax with Spider-Man, Captain America, Quake, and Iron Fist. War Machine projected missiles to destroy the machine that Galactus created in order to devour the planet and also helped to send the Devourer of Worlds into the Negative Zone.

Rhodey is a normal human being who does not have any superhuman abilities. However, he has the War Machine Armor, which is equipped with massive firepower. Rhodey was also member of the United States Military and has military training that he is able to use for the capabilities of his armor.

James Rhodes, like Pepper Potts, is a no-nonsense person. Unlike Tony he looks at the practical side of Iron Man's adventures and worries about his friend's safety. He wants to be able to help his friend though he does not appear to know how exactly. 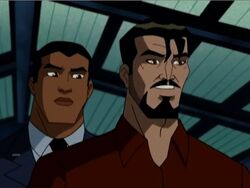 Despite their ideological differences they are good friends. Though the two constantly bicker about things such as what Tony should actually be doing with the armor, Rhodey supports Tony.

James and Pepper are Tony's two closest friends. As such they appear to spend plenty of time together because of Tony. They also comfort each other while Tony is away saving the world.

Retrieved from "https://marvelanimated.fandom.com/wiki/War_Machine_(Yost_Universe)?oldid=77719"
Community content is available under CC-BY-SA unless otherwise noted.