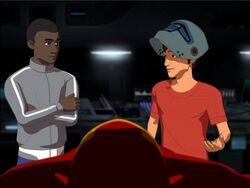 Rhodey was the first person that Tony trusted to reveal his new suit of armor to. However, Tony was involved in an explosion that seemingly took the life of Howard Stark. Tony came to stay with him and his mother. They turned Tony's secret lab on his family property into the Iron Man Armory. Together they attended the Tomorrow Academy where they met Pepper Potts, Happy Hogan, and Gene Khan.

Rhodey then helped Tony cover up his dual identity by covering for him and giving him information from home and the armory. When Pepper found out she helped Rhodey help out Tony. After Mandarin blew up most of the armors, Rhodey donned the War Machine armor so he could give Tony his armor and help him personally.

Retrieved from "https://marvelanimated.fandom.com/wiki/War_Machine_(Iron_Man:_Armored_Adventures)?oldid=88510"
Community content is available under CC-BY-SA unless otherwise noted.