Adrian Toomes, also known as Vulture and the alias Arthur Avis, is an elderly aerodynamics engineer and inventor who developed a special device that could restore his youth. 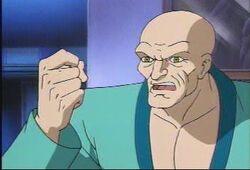 Adrian Toomes was the owner of Toomes Aerodynamics. Obsessed with flying from a young age, the elderly Toomes began using his company to research anti-gravity fields. Feeling that he was wasting time, Norman Osborn attempted to strong arm Toomes Aerodynamics stockholders into letting him buy it, and merge it with Oscorp. Because of this Toomes developed strong grudge against Norman. 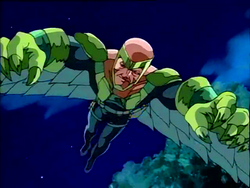 Toomes finally mastered anti-gravity, and created a set of wings that enabled him to fly. Using the technology from the Tablet of Time that he bought from Hammerhead, he also created a device that allowed him to suck the youth out of someone else to temporarily make himself young. However the process was for the most part temporary, as he would later revert to his elderly self while his victims would simultaneously have their youth completely restored. 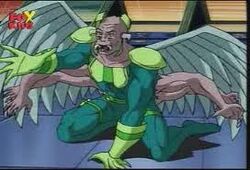 After using his youth draining device on Spider-Man, he unintentionally absorbed his disease, and began mutating into a version of Man-Spider. After Curt Connors tricked the Vulture into permanently holding this disease, Vulture went into hiding. Later Toomes seemingly cured himself of mutation but he kept changing from his young self to his old self (and vice versa) with no control over this transformation. He eventually used his original technology and swapped life ages with an infant Silvermane, and became young full-time while Silvermane reverted to his elderly self.

Later he used his newfound youth and powers to join the Insidious Six and attempted to aid Kingpin in finding the Doomsday weapon.

Vulture was voiced by Eddie Albert as an old man and Alan Johnson as a young man.

Arthur Avis is an original pseudonym created for the series. Avis means "bird" in Latin.

His business partner ran the financial aspects while he ran the inventions. However, he found that his partner had been embezzling funds and he had no legal recourse. He used the flight harness he had recently invented to wreck the business and begin a life of crime.

He was the first supervillain that Spider-Man fought. Their battle was also when Spider-Man realized he could sell pictures of himself to Jameson after the Bugle offered a cash reward for a picture of Vulture.

He has, at points, restored his youth through biochemical means. He did once use a life-sucking device like the one used on the show to make himself young and Spider-Man old.

He was an original member of the Sinister Six. He was the last foe to fight Spider-Man before the final Doctor Octopus battle. He has since been involved in nearly every version of the team and has become good friends with Electro.

While in prison, he thought he was dying so he revealed the location of an extra harness to his cellmate. The cellmate revealed that he tricked Adrian and took the harness anyways to become the second Vulture. Adrian escaped prison and defeated the cellmate and Spider-Man.

He became involved in Atlantic City casino racketeering to prepare for his own funeral. However, this was ruined by Hobgoblin.