It's been a while since anything was announced about the Moon Girl and Devil Dinosaur series being developed at Marvel. At Disney D23, Marvel Entertainment officially announced the series saying it was heading to the Disney Channel in 2020.

The series follows the adventures of the thirteen year-old Lunella Lafayette and her time-displaced pet Tyrannosaurus Rex.

The series is being produced by Laurence Fishburne and Helen Sugland of Cinema Gypsy Productions and Steve Loter of Kim Possible. Jeff Howard and Kate Kondell will produce and serve as story editors.

Fishburne said in a statement, "As an avid comic book fan, I am thrilled to be involved with Marvel's Moon Girl and Devil Dinosaur. Disney Channel is the perfect platform to explore this pint-sized female African American superhero and I can't wait for their audience to enjoy the lighthearted adventures of Lunella and Devil Dinosaur." 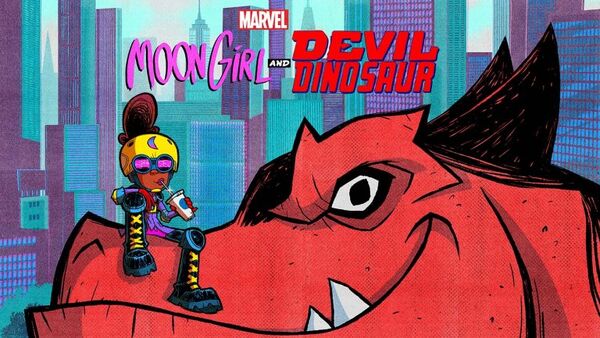 Retrieved from "https://marvelanimated.fandom.com/wiki/User_blog:ARTaylor/Moon_Girl_and_Devil_Dinosaur_Officially_Announced?oldid=78634"
Community content is available under CC-BY-SA unless otherwise noted.