Ultron is a powerful robot and deadly enemy to the Avengers. 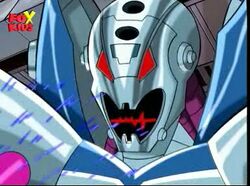 Ultron was originally a robot created by Hank Pym to be the ultimate superhero. However, when Ultron became fully sentient it rebelled against Pym, seeking nothing but its creator's destruction.

As part of Ultron's mad rampage, it created the android Vision. Vision also became fully sentient and rebelled against Ultron, warning the Avengers of Ultron's scheme to attack the President of the United States of America. Ultron fought a tremendous battle against the Avengers ending in its own destruction.

Remnents of Ultron later resurfaced in Japan, posing another major threat to the Avengers. It battled the Avengers once more and again was defeated. 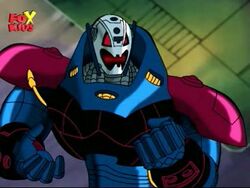 Vision later became obessesed with finishing off Ultron and used himself as bait to lure Ultron out. The plan worked a little too well. Ultron attacked and almost destroyed Vision, and then tried to force Ant-Man to reprogram Vision to turn him evil again. When the Avengers showed up, Ultron was destroyed once and for all when Falcon and Hawkeye threw him down a chasm of his self-destructing fortress.

Ultron was voiced by John Stocker.

First animated version of the character.

The character, along with the rest of the series, was heavily criticized as he changed forms in every appearance. Fans felt this was to sell different Ultron toys, one for each model.

When activated, Ultron unfortunately rapidly learned humanity's history and their capacity for violence. Realizing his mission could only be achieved by eradicating humanity, Ultron attacked Pym and escaped. Eventually, it formed a new Masters of Evil, under the guise of the supervillain Crimson Cowl. When the Masters attacked the Avengers, they were defeated and Ultron's true nature was revealed. He was destroyed by Ant-Man himself.

Ultron's AI had survived and he himself a new body of adamantium. He repeatedly attacked the Avengers on multiple occasions, which Ant-Man always feels guilty for.

The Beyonder took Ultron to the Secret Wars. Doctor Doom took control of it to kill Thor, who actually teleported away giving the appearance of death. It was defeated by Thing, who kept its head as a trophy.

He was once held captive in a Doombot.

Ultron once took control of one of Iron Man's armor. The model it controlled was destroyed.

Ultron built an army of Ultron drones and obliterated the European country Sloriana conquering it's remains.

Retrieved from "https://marvelanimated.fandom.com/wiki/Ultron?oldid=67733"
Community content is available under CC-BY-SA unless otherwise noted.