In season three the show was renamed Ultimate Spider-Man: Web Warriors and the fourth season was called Ultimate Spider-Man vs the Sinister Six. It is the second animated series, along with Avengers Assemble, to change names during production after The Incredible Hulk.

The series is the third longest Marvel animated series, tied with X-Men: Evolution at four seasons each. It surpassed the number of episodes Spider-Man had in three seasons but only went to four seasons, one season short of its predecessor.

Peter Parker has been saving lives and fighting supervillains as Spider-Man for about a year and is still learning the ropes on being a superhero. Nick Fury of S.H.I.E.L.D. finds Peter and offers the young hero a chance to be trained becoming the "Ultimate Spider-Man" while learning to work with other teenage superheroes.[1]

In a break from other series, Spider-Man breaks the fourth wall and speak directly to the audience. It will also include fantasy sequences from Peter's mind.[2]

The series is part of the Marvel Animation Universe that includes Avengers Assemble and Hulk and the Agents of S.M.A.S.H. Several of the cast reprised their characters on The Avengers: Earth's Mightiest Heroes. However, there are conflicting reports as to whether this universe is part of the Christopher Yost Animated Universe, but it is not considered to be connected.

Jeph Loeb recruited artists Ed McGuinness, Stuart Immonen, Humberto Ramos, and Paolo Rivera to work on the art. The goal was to get the series to have the "tonal flavor" of the comics by using Marvel Comics artists.[4]

The look of the series was inspired by the artwork of Stuart Immonen (who previously worked on the Ultimate Spider-Man comic), Humberto Ramos, Ed McGuinness and Joe Quesada.

The animation work was done by Marvel Animation and Film Roman.

J. K. Simmons previously played the role in the first three live action Spider-Man films and expressed interest in reprising the role for the reboot. [6]

Adrian Pasdar reprising the role of Iron Man from Marvel Anime: Iron Man. [7] It is unknown, but unlikely, if this means the two series are set in the same continuity.

Bell went on to voice Spider-Man on the The Avengers: Earth's Mightiest Heroes episode "Along Came a Spider..." replacing Josh Keaton from The Spectacular Spider-Man. This caused some controversy with Spectacular fans who were hoping to hear Keaton reprise the role.

The producers of the series (Duncan Rouleau, Steven T. Seagle, Joe Kelly, and Joe Casey) who were also known as the Men of Action Studios, previously worked together on Ben 10 and Generator Rex. [9][10][11][12]

The test footage at C2E2 Showed J. Jonah Jameson prattling on about masked vigilantes being a menace while Nick Fury scolded Spider-Man as he nabs a crook. [13] 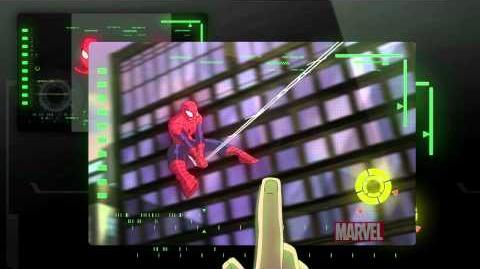 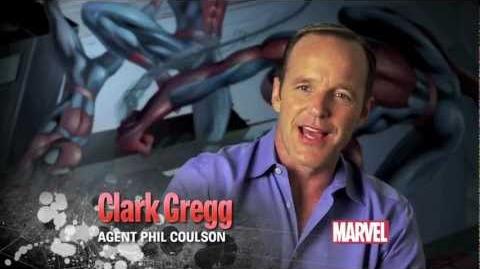 There were currently were one-hundred and four episodes total making it the most numerous Spider-Man series, though Spider-Man lasted one season longer.

The series aired as the "keystone" of the Marvel Universe Animation Block on Disney XD along with The Avengers: Earth's Mightiest Heroes. [14]

There was also be short-form series included in the animation block including[15]:

The first episode was aired at the South by Southwest Interactive Festival in Austin, Texas on March 11th, 2012. [16] 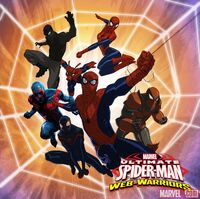 Following The Walt Disney Company's purchase of Marvel Entertainment Sony Pictures Television relinquished all television rights to Spider-Man, including animation, in exchange for "some concession vis-a-vis the live action Spider-Man features" thus raising questions about what would happen to The Spectacular Spider-Man. [19]

On April 13, 2010 after several months of near silence, Marvel Comics' Tom Brevoort was asked about Spectacular on formspring, and simply said, "That was a wonderful cartoon, but finished now." Though asked for clarification, he added, "I'm not officially connected to the show, so I can't tell you anything officially; the people connected with it will have to do that." This came along with the announcement of a new Spider-Man series based on the Ultimate Spider-Man comics. [20] 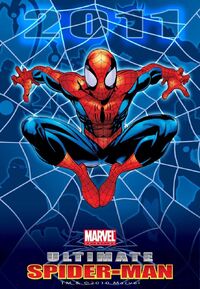 This was the first series Jeph Loeb oversaw in his job as Executive Vice President, Head of Television. At the 2010 Comic-Con in San Diego he hired Joe Casey, Joe Kelly, Duncan Rouleau and Steve Seagle, best known as the creators of the Ben 10 and Generator Rex series, are set to become the supervising producers of the series. [21]

This was the first Spider-Man project produced by Marvel Animation. Loeb said, "We have an incredible writing staff including Brian Michael Bendis who has written every single issue of Ultimate Spider Man, more than 150 issues in 10 years, Paul Dini, and Man of Action." Loeb stated that the focus on Peter trying to balancing his normal life as a teenager while trying to become a major league hero like Captain American, Iron Man, and the Avengers. [22]

Brian Michael Bendis, who created the Ultimate Spider-Man series, will write for the series.

Concept art revealed at the 2011 Comic-Con showed Spider-Ham, though it is unknown if the character will appear in the series or if this was a joke.

The writers held a number of summits to discuss the show attended by Joe Kelly, Steven T. Seagle, Duncan Rouleau, Paul Dini, Brian Michael Bendis, Jeph Loeb, Joe Quesda, Stephen Wacker, Cort Lane, and Harrison Wilcox. The series deviated from most animated shows as it does not have a single story editor. Usually, the story editor works with the show's producers to break each story then assign the script to a freelance writer. However, Ultimate Spider-Man decided to emulate a traditional live-action series by having the writers get together to discuss the direction rather than do them separately. Wilcox said, "Because this is our Spider-Man show, and the first show that Marvel is producing itself, Jeph wanted to do things a little differently and have a writers' room meet together to break the story." In the first summit, the creators mapped out the entire first season. They planned out arcs for the heroes and villains as well as listing the general idea of each episode. Everyone in the summit had an equal voice, though not all were writers, so that everyone can add their own ideas. Through the summits, the group decided who would be best to write which episode. [23]

Drake Bell was a big fan of Spider-Man growing up. In preparation for the role, he went back and re-read the comics he grew up on. [24] 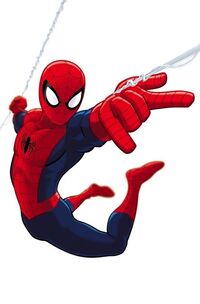 Marvel's Editor in Chief Axel Alonso said, "I couldn't be more excited for Marvel Universe. There is something special about The Avengers and Spider-Man that speaks to fans of all ages, and with the launch of Marvel Universe on Disney XD this April, what better way to connect the two experiences than these new ongoing series?"

The series was written by Dan Slott and Ty Templeton with the art by Nuno Plati. Their goal was to have something for younger readers while exciting older comic book fans.

Given the two comics' titles, it is possible that this series and The Avengers: Earth's Mightiest Heroes are in the same continuity. Though this has yet to be specified.

Early reviews for the series have been mixed but generally positive. The show has been compared positively to similar series Batman: The Brave and the Bold and the comic book series Scott Pilgrim. Though, critics have been divided on whether the comedy fits with the character or not.

In an advanced review of the pilot, Eric Goldman of IGN gave the episode a 6 Okay out of 10. He noted that Spider-Man, like DC Comics' Batman, was the flagship character of Marvel Comics and has been continually in the public eye since his creation. He felt that the series was not just a rehash of the other series that came before it, and that Spider-man was in a different situation interacting with different characters than what has been seen before. Eric noted that Spider-Man encountered villains and heroes from other comic series while at the same time acknowledging his own rogues gallery. He appreciated J.K. Simmons coming back to the role from the films. However, he felt the tone and style of the series set it apart from other adaptations for better or worse. He felt that Spider-Man breaking the fourth wall was more suited for someone like Deadpool. He thought they made him more cartoony as they relied on old cliches. Eric noted that while Spider-Man has a great sense of humor, this style of comedy was not like him at all. He did not think if felt like Spider-Man as if forced. Though he did feel that some of the jokes were well done. While he appreciated most of the cast, he thought Drake Bell came off as overly whiney and grating. He did like seeing Clark Gregg in a crossover that could never happen in the films. He was disappointed that a series involving Paul Dini was not quite up to his usual standards. He felt that the series had a good crew behind it, but was not making a good use of the talent involved or character they used. He stated that the series lacked substance by trying to have serious moments in-between "wacky shenanigans," robbing the dramatic moments of their potential weight. He thought the animation was decent and the fight scenes were not impressive as The Spectacular Spider-Man was. He noted that there is room for more lighthearted versions of classic heroes, such as Batman: The Brave and the Bold, but felt that the series felt weightless as Spider-Man wasn't being taken seriously. "Look, kids will almost certainly love it. They love Spider-Man (and well they should) and the show is bright and silly with broad humor right up their alley. And that's fine. But considering this is Marvel's most recognizable, iconic character, in the first completely self-produced Spider-Man series Marvel has made, it feels like a missed opportunity for something that truly hit home with Spider-Man fans of all ages." [29]

However, the reviewers of Marvel Animation Age were more forgiving. Jeffrey Harris felt that it was unlike The Spectacular Spider-Man or Spider-Man but appropriate for Spider-Man. He thought the animation was better than Spectacular. He enjoyed the combination of goofy comedy and serious tone. James Harvey thought the show's approach to the character prevented it from becoming stale. He felt the jokes worked for the most part, but some did not. He did notice a kind of committee feel to the series. He felt that the comedy did not hurt the action and while cartoony did work in the context of the series. Though he did point out a lack of drama and depth to the series, as serious moments were ended quickly. James pointed out that while the series deviated from the source often it still alluded to its vast history. He did not feel there were any weak links in the crew and thought the cast was spot-on. He thought the animation was great and the character designs were nice. He pointed out Kevin Manthei's work on the score. He stated that there was potential to improve as long as it did not sacrifice character, though overly jokey tone would not please some long-time fans. "The animation is great – arguably the best Spidey has ever looked in animation – the characters are all well-defined if not a little flat, the set-up predictable but not boring, and the overall results are positive. Ultimate Spider-Man is a solid starting off point for younger viewers to be indoctrinated into the Spidey mythos, and hopefully for an enjoyable destination for long-time fans. As I said, it is worth giving a chance on." [30][31]