Uatu is a Watcher who often breaks his vows so that he can help civilizations against Galactus.

Like the other Watchers Uatu took a vow to only observe, never to interfere. They put all their knowledge into the Universal Library. But when their greedy knowledge grew too great many of the Watchers turned into slug-like creatures. He still watches over his sector of the universe. However, the presence of Galactus threatens to destroy all that Uatu observes.

He contacted the people of the Horseshoe Nebula to warn the people about Galactus. He was viewed by the Kree captain Kalek. However, the people there were massacred.

When Galactus approached the planet of Zenn-La Uatu warned the people. Norrin Radd demanded to know how to stop Galactus. Uatu told him and Norrin approached Galactus and made a bargain to become his herald, the Silver Surfer. Uatu continued to watch him on his quest through the galaxy. 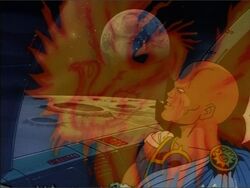 Uatu was on the Earth's moon when Jean Grey became the Dark Phoenix. He looked over to Earth sensing her transformation along with Doctor Strange and Thor.

He eventually warned the people of Earth before Galactus arrived. The combined might of the Fantastic Four and Silver Surfer repelled Galactus, though the Surfer became trapped on the planet. When Surfer finally freed himself he returned to Zenn-La only to find that it had been moved by Galactus.

Uatu watched as the Surfer, went to the Universal Library and learned the truth about the Watchers.

Uatu watched as Thanos destroyed the universe while the Surfer tried to stop him.

He wants to help but his vows prevent him from doing so. Despite this, he breaks his vows and helps anyways. He has broken his vows by helping the Zenn-La and Earth.

Uatu was voiced by Alan Oppenheimer on Fantastic Four, Denis Akiyama on the first three episodes of Silver Surfer, and Colin Fox for the rest of Silver Surfer. He only made unvoiced cameo appearances on X-Men.