The Secret History of Venom (Short)

The Secret History of Venom is a short video that is set in the same universe as Spider-Man. In it Venom explains the history of the Klyntar, Venom's alien species, and uses it as an allegory for his own mission on Earth.

In a closed building at night an unknown man frantically runs away. However, he is attacked by the Venom Symbiote who bonds with him. Venom tells his new host that he wouldn't let him escape because he is a vital part of his new plan. Venom believes that his new host is special and decides to tell him the secrets of his species, the Klyntar, and why they came to Earth.

The following is narration from Venom.

"It all began billion of your Earth years ago with an ancient nearly immortal being whose existence predated the universe itself. He was known as many things. The King in Black, Lord of the Abyss, The Void. But his real name was Knull. Knull was at war with other cosmic beings called Celestials. They desired to bring light to the universe but Knull was darkness itself. Emptiness."

"As long as there was more dark than light in the cosmos, Knull remained stronger than the Celestials, for they were many. So from his own shadow, Knull created four perfect weapons. His weapons were not just tools, they were lifeforms. . . intelligent, trusted servants, representing the vacuum, the complete absence of light, created for the sole purpose of serving him in combat."

"Pleased with his creations, he gave them a name. . . Klyntar, a word in his ancient tongue that meant cage for Knull's enemies would be unable to escape the destructive power. Their epic battle shook the heavens. But in the end, Knull was victorious. And so, to this day, the cosmos contains more dark empty space than light. All thanks to the Klyntar. They gave Knull the power to destroy nearly every Celestial, forcing the rest of me to the furthest reaches of space."

"When the war was over, the Klyntar, ever obedient, asked Knull how best that it could continue to serve him. 'I created you for one purpose' Knull said. 'And that purpose is fulfilled. I will return to the void of existence alone. You are useless to me know.' The Klyntar, not wanting to be separated from their creator, clung to him. The defiance of his creations enraged Knull. Knull abandoned the Klyntar and left to be alone. He showed no concern for the fate of the living creatures he created. And there they stayed in their solitude. They felt betrayed, abandoned, and forgotten. In time, their sun grew old and cold. The dying star no longer kept the asteroid in orbit."

"For ages, the Klyntar hurdled through darkness, unmoving but alive. Adrift and alone, the Klyntar were surprised when a new host arrived. An explorer from another world had found them and accepted them. The Klyntar dreamed to be more than mere tools. And their host agreed. They would make each other stronger as equals unlike the cruel and controlling Knull. This was truly a symbiotic relationship. The alien host returned to her home world. The original Klyntar became known as the Four Sisters. And then they multiplied further, spreading out amongst these new hosts, empowering them. And for a time, the Klyntar lived their dream, finding a new purpose, thriving as equals in peace with this alien race. Or so they thought."

"One of the aliens refused the Klyntar, and told the others they were dangerous. That the Klyntar were ruining their culture, their very identity. As he peddled his lies, the Klyntar realized he could be persuaded if only he was shown the truth. The truth about the power they could bring him. Power they could share. They only wanted to improve him, to make him better. But he not only refused the Klyntar, he destroyed one of our sisters! Once again the Klyntar were betrayed. Our dreams of harmony, equality, crushed. We realized we had been foolish to think we could live in peace with another species. We were created for war, for destruction. If we could never be equals, than we would control our hosts, body and mind. The Klyntar would never again live in harmony with others. Only in dominance."

"We declared this planet our home and named it after ourselves. Klyntar. But our dominance would not end there. From the remains of their lost sister, the Three Sisters created two new weapons. The first was a fiery beast of ultimate destruction. The second was a great warrior. Me. I was designed to help plunge the universe into darkness and that's what I did. Like the long gone creator of the Klyntar, I help darken the very cosmos. I led my people to so many planets, moons, anything in our way became ours. I perfected my techniques and found so many perfect homes for my family to conquer. That's when I heard of a distant planet ripe for the taking. Yours. I believed its inhabitants to be weak. I was wrong, especially one human. The Spider-Man! I sensed his power. His purpose. I even attempted to bond with him. But he rejected me! This planet itself rejected me! Just as my sisters were once rejected! And the Klyntar will not stand for such things!"

"Earth will pay. With your help, willing or not, my plan will unfold. The Spider will be punished. And this world will finally be ours." 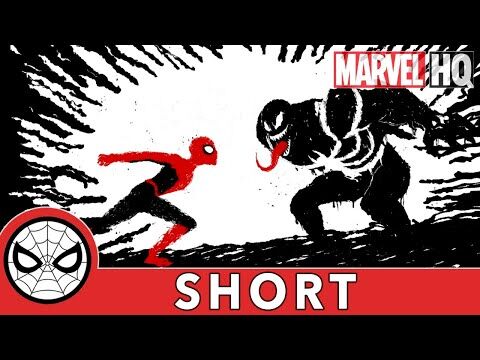