The Avengers: Earth's Mightiest Heroes was a series that ran from September 22nd, 2010 to June 28th, 2012. It is the second series to focus on the Avengers after The Avengers: United They Stand.

For the first time since Spider-Man and Spider-Man and His Amazing Friends, the series featured a main character, Iron Man, who also appeared on another series currently airing, the other being Iron Man: Armored Adventures.

When the worst criminals in the world are broken out of prison, Earth's greatest champions must ban together and become an unstoppable fighting force. The team includes Thor, Captain America, Hawkeye, Black Panther, Hulk, Wasp, Ant-Man, and their leader Iron Man. Together they'll face villains such as Loki, Kang the Conqueror, Ultron, Doctor Doom, Baron Zemo, Enchantress, Abomination, Crimson Dynamo, HYDRA, Serpent Society,[1] and others.[2]

Story Editor Christopher Yost confirmed in an online interview that this series took place in the same universe as Wolverine and the X-Men. On audio commentary, Yost said that Hulk vs Wolverine was a prequel to Wolverine, and Thor: Tales of Asgard is a prequel to Hulk vs Thor. Thus, this series is a continuation of the fourth Marvel animated universe.

Chronologically, Avengers takes place after Thor: Tales of Asgard and Hulk vs Wolverine but before Hulk vs Thor and alongside Wolverine and the X-Men.

Fred Tatasciore, Alex Desert, Steven Blum, and Graham McTavish reprise their roles from Wolverine and the X-Men, Hulk vs Wolverine, and Hulk vs Thor. Tom Kane previously played Ultron on the unconnected Next Avengers: Heroes of Tomorrow.

Matthew Wolf auditioned for the role of Thor, having played him on Hulk vs Thor and Thor: Tales of Asgard, but the producers of the series wanted to go in a different direction. 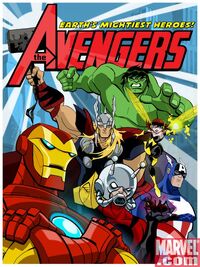 Much of the series is based on the various films. For example, Eric Loomis was chosen as Iron Man because he sounded like Robert Downey, Jr., who plays the character in various films, and J.A.R.V.I.S. is an artificial intelligence instead of a butler.[7]

The first episode was screen at the 2010 Comic-Con in San Diego.[9]

The series is part of Marvel Entertainment's overall "Avengers Assemble" strategy that began with Iron Man and The Incredible Hulk. This is all to build up to the The Avengers film in 2012.

Some actors began recording lines for the assumed season two before the series began to first air.[10]

Matthew Wolf, voice of Thor on Hulk vs Thor and Thor: Tales of Asgard, auditioned for the role once again. But the show's producers had a different idea than those of the animated features and he was not cast.[11]

A series was intended to be produced called Hulk: Gamma Corps. However, when this series went into production Gamma Corps was incorporated into this one as it was more inclusive. Eventually, a similar sounding series was announced called Hulk and the Agents of S.M.A.S.H.. It is unknown if the fate that befell Gamma Corps also happened to Thor.

The animation is done by Film Roman, who also worked on X-Men: Evolution and The Super Hero Squad Show. They had already begun production on twenty-six episodes when the series was announced on October 7, 2008.[12][13]

The series featured twenty-six episodes per season for a total of fifty-two, which is how many were ordered total.[14]

There are also twenty micro-episodes, roughly five minutes each, that introduce the characters and people of the universe. They air online on Marvel.com, MarvelKids.com, DisneyXD.com/Avengers and Disney XD Mobile. The micro-episodes began airing on September 22, 2010 and were released once a day. These episodes detail the adventures of each Avengers member before the formation of the team. On October 5 select micro-episodes will appear for free on iTunes. Starting October 11 and going till October 15, Disney XD will air four of the micro-episodes together.[17]

A comic book tie-in was released along with the series. The series was written by Christopher Yost, Scott Wegener, and Patrick Scherberger. It lasted four issues filling in space in between the episodes, mostly about catching other breakout criminals.[18]

On June 12, 2012 it was announced that the series would not be picked up for a third season. Instead, Marvel Animation would produce Avengers Assemble. The series would be produced completely in-house along with Ultimate Spider-Man and Hulk and the Agents of S.M.A.S.H., in the same continuity. The line-up is to be the same from The Avengers film with the addition of Falcon.[19]

Head of Television Jeph Loeb compared the change to how one comic book line will change creative hands. The new series is part of the Marvel Animation Universe along with Ultimate Spider-Man and Hulk and the Agents of S.M.A.S.H. and currently does not appear to be part of this series' universe.

The cancellation left several plot threads hanging without a proper resolution. The Superhuman Registration Act had been teased several times hinting at an adaptation of the Civil War series while Surtur was being built up as a major threat. Christopher Yost and Joshua Fine had been planning to feature "magic and mutants" in the third season.

When asked about a potential revival, whether in animated or comic book form, Yost said there had been no discussions.[20] 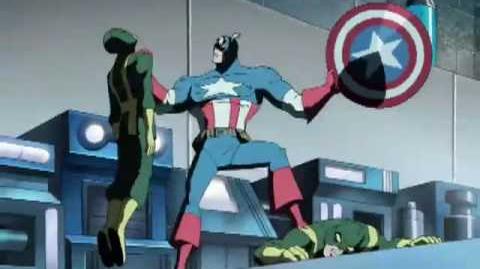 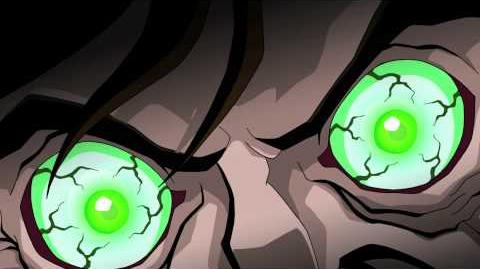 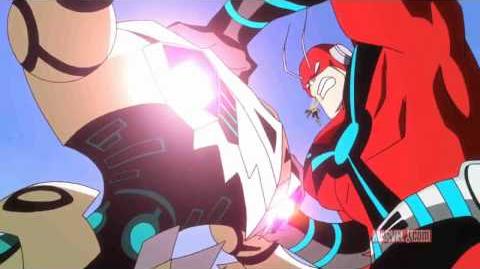 Newsarama ranked the series the tenth best animated comic book series. The site stated the series was the "purest Avengers" found and felt the theme song was catchy.[21]