Thanos is an incredibly powerful being. He seeks to release the being known as Lady Chaos by destroying everything in his path.

At some point Thanos went to Zenn-La to learn peace. However, a traumatic event happened that Thanos repressed. He left the planet apparently learning nothing.

Eventually Thanos learned of the being called Lady Chaos. He became infatuated with her, despite her being only a statue. He resolved to releasing her, believing it could be done with enough destruction. 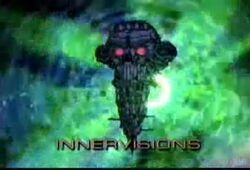 Thanos learned of Galactus, a powerful being capable of destroying planets. Thanos desired to learn more about the being to control him. In order to accomplish this, he decided to go after Galactus' herald, the Silver Surfer. 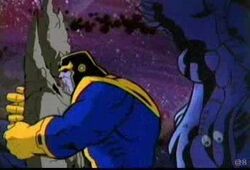 Thanos found Ego, the living planet, and forced the being into helping him. Ego lured the Surfer to him and captured the herald. Thanos invaded his mind but came across memories that were blocked off. Thanos broke through and discovered that the Surfer was originally Norrin Radd from Zenn-La. Overcome with his own memories of the planet, Thanos broke down and retreated. 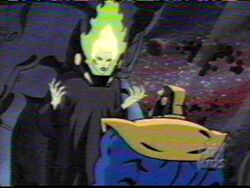 Thanos began traveling the cosmos destroying planets and anything else in his path. He eventually came across a planet where the entire population dreamed their reality. Silver Surfer was there to warn them. He freed their "greatest hero" Beta Ray Bill who helped them all escape their fictional reality. The planet then used their technology to fool Thanos into thinking that Lady Chaos had been freed so he would leave. 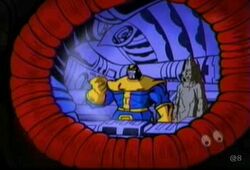 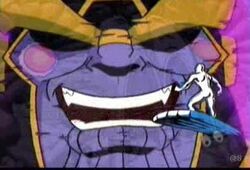 Unfortunately, Silver Surfer was cancelled and the cliffhanger ending was never resolved.

Thanos is an immensely powerful being. He can emit powerful energy blasts that makes him as powerful, possibly more so, than the Silver Surfer. He was also able to break through the extremely powerful mental barrier put by Galactus in the Surfer's head to keep him from finding out his origins on Zenn-La.

Known for his morose and pessimistic personality, Thanos is obsessed with chaos. He has gone so far as loving the female personification of the concept from the bottom of his heart.

Thanos was voiced by Gary Krawford.

This was the first version of the character outside the comics.

In the comics, Mentor is Thanos's father not brother. This was based on an error in the script that the producers then became stuck with.[1] Thanos does have a brother named Starfox, who has been a member of the Avengers.

There were a number of stories that began development for the proposed second season before Silver Surfer was cancelled.

In it, Lady Chaos would still be in stone with Thanos believing she spurned him. He would hold the pre-Big Bang universe in his hand, which Silver Surfer would be alive in attempting to survive. He would turn trees in his ship into his family so they would praise him. However, they too would reject his deeds. Silver Surfer escapes the universe ball and battles Thanos.

Thanos would then show Silver Surfer the history of his life. He was rejected by his father, his planet ravaged by Skrulls, and how he first met Lady Chaos. They were watching nebulas colliding and being destroyed when he fell in love. However, she rejected him and they fought. Their battle crossed galaxies and even his home planet was destroyed. Thanos and Silver Surfer continue their battle but Silver Surfer is almost defeated until he shows Thanos images of goodness. Lady Chaos would then free herself and insult Thanos. She then crushes Thanos into dust. Silver Surfer then remakes the universe.

Thanos comes from Titan, the moon of Saturn.

Mentor is his father, Gamora is his foster daughter, Nebula is his alleged granddaughter.

He is infatuated with the personification of Death. The name was likely changed for censorship issues, similar to the Insidious Six. In the series it is possible that Thanos simply got her name wrong and she is Death.

Drax is a human named Arthur Douglas, whom Thanos killed when he went to Earth fearing they had seen his ship. Mentor resurrected him and gave him powers.

He infamously found six Infinity Gems that he put into his gauntlet making him all powerful. To win Death's heart, he wished that half the people in the universe would die, killing many including Mary Jane Watson. Many superheroes such as Silver Surfer, Adam Warlock, Thor, Captain America, Spider-Man, Cyclops, as well as powerful cosmic beings like Galactus, Eternity, and Infinity attacked Thanos to stop him. Thanos easily overpowered them all killing many. Eventually, he vainly replaced Eternity with himself leaving his body and the gauntlet behind. Nebula then took the gauntlet, erased Thanos' mind, and restored the universe.