Thanksgiving Day is from the Non MAU series The Spectacular Spider-Man.

Thanksgiving Day is a federal holiday celebrated on the fourth Thursday of November in the United States of America. It is a day where people reflect on what they are thankful for, usually friends and family.

Most societies have some kind of festival held towards the end of the year. In the United States, schools and most places of employment will have the day off.

As part of the holiday season, it comes after Halloween in October and before Christmas in December.

The most iconic feature of Thanksgiving is the traditional feast eaten. The main course is usually a large oven baked turkey. There are numerous other side dishes such as yams, mashed potatoes and gravy, stuffing, and whatever else the family desires. 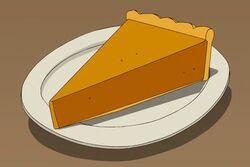 The meal is finished off with a variety of deserts such as pumpkin pie.

The meal can be difficult and extensive to make and requires much preparation. Some people who have never prepared the meal, or at least helped, do not realize how hard this can be.

Peter Parker tried to make the dinner when his aunt, May Parker, was ill in the Manhattan General Hospital. However, May did not think he could handle it and asked his close friend Gwen Stacy to prepare the meal and bring it over.

Peter began preparing a meal but burned the yams, something spilled over on the stove, and he made a general mess. Gwen also began preparing food and the turkey that same morning and did not make a mess. That night she and her father, George Stacy, brought over the food and had a feast with Peter, May, and Dr. Bromwell.

One of the most spectacular events held on Thanksgiving Day is the Thanksgiving Day Parade held in New York City. It is a large event that takes up many blocks of the city. Many people from all works of life come from all around to watch the parade.

The most notable feature of the parade is the large parade balloons. These humongous helium-filled balloon are shaped like large characters such as a fish, turkey, pilgrim, gorilla, Statue of Liberty, clown-colored bear, dinosaur, football player, cat, bee, and mustang. However, the balloons require many people to hold them down or else they will float away. Also, if punctured they can cause near-explosive releases of the air inside.

Many high school bands come from around the area to march and play their instruments, such as those from Midtown Manhattan Magnet High School and Wood Oaks High School. Often, the football players and cheerleaders will hold balloons of their mascots down the parade route.

One Thanksgiving Venom, the villainous combination of Eddie Brock and the alien symbiote, grabbed Peter Parker out of his house as he was getting ready to leave as Spider-Man. The two fought in Peter's backyard before he tied up Spider-Man and left threatening to hurt Peter's loved ones.

Spider-Man went to the hospital to protect his aunt but was trapped by Venom. He fought Venom until the symbiote got the upper hand. Venom then decided to leave May alone and go after the one that Peter cared about the most. Thinking that he meant Mary Jane Watson, Spider-Man went to the parade.

Spider-Man found Mary Jane who was with Flash Thompson but not in danger. He then saw Eddie with Gwen but lost them. Eddie became Venom and kidnapped her. He tied her up to the Wood Oaks gorilla balloon and let her hang from the hand.

Spider-Man found her but Venom prevented him from saving her. After some back and forth Spider-Man landed on the gorilla and tricked Venom into scratching the balloon so it would slowly deflate. However, the webbing broke but Spider-Man saved her. Venom caused him to drop her but thankfully her fellow students Mary Jane, Flash, Kenny Kong, Liz Allen, Sally Avril, Randy Robertson, and Hobbie Brown use the gorilla's deflated paw to catch her.

Venom and Spider-Man fought on the streets until Venom once again got the upper hand. Spider-Man faked giving up and the symbiote left Eddie to return to Spider-Man. However, Peter's mental strength was strong and he fought off the symbiote. He scooped the alien into a remnant of the gorilla then left Eddie unconscious.

Spider-Man distracted a group of workers at a construction site when dropped the symbiote in drying cement.

At the same time, Bromwell took May home and kept her company until Peter returned. Peter apologized for not helping her back. Gwen and George arrived and they began their evening feast. Gwen was thankful to have started the meal early before getting Post-Traumatic Stress Disorder because of her ordeal. The five of them had a wonderful evening and May revealed that she sold recipes in a cookbook. That night, Peter cleaned up the dishes and his mess.

Peter then pulled out the gene cleanser he got from Dr. Curt Connors and poured it down the drain accepting his life as Spider-Man. When George and Gwen left, she expressed her feelings for him by kissing him on the lips.

This is currently the only Marvel animated version of the holiday.

Retrieved from "https://marvelanimated.fandom.com/wiki/Thanksgiving_Day_(The_Spectacular_Spider-Man)?oldid=79710"
Community content is available under CC-BY-SA unless otherwise noted.