Talon is from the Non MAU series Spider-Man: The New Animated Series.

Cheyenne is a bungee jumping instructor as well as a high-level thief known as the Talon.

However, it is revealed that she came from a rich family and was on trust fund.

She got a job as a bungee jumping instructor, but she also became a thief using various high-tech devices.

At some point in her life, she met Harry Osborn and began a relationship with him.

During one of her burglaries where she stole a trophy, she met Spider-Man who was on a night time patrol.

After exchanging conversation, they fought with Cheyenne's googles being yanked off, revealing her true identity, however she got away after distracting Spidey with a falling girder.

Later, she was invited to dinner by Harry at Peter and Harry's apartment to meet his friends Peter Parker and Mary Jane Watson.

She knocked on the door and Peter answered it, astonished to see the same woman he had seen robbing a building in his identity as Spider-Man.

Cheyenne introduced herself but saw the astonished look on Peter's face and asked if Harry was around.

Mary Jane introduced herself and thought Peter was gawping at her, so she gave him a nudge.

At dinner, Peter hoping to trick her into letting her guard down asked if she knew Harry was rich.

Cheyenne said that she didn't care and loved Harry just the same.

Cheyenne then tells Harry that she has to leave to pack for a skiing trip to Utah, despite Harry's protests, while she is really planning her next robbery.

She thanks Harry for the meal, promising to call when she gets back and then leaves with MJ.

She says goodbye to Peter who is still mistrustful of her and he gets another nudge from MJ as she walks out.

Later that night, Cheyenne presses a button on the desk of her apartment revealing her secret Talon gear along with plans of the other places she is going to rob.

She got dressed and then went to another building.

Peter knew if Harry ever found out about Cheyenne's double life, it would break his heart, so he followed her as Spider-Man and asked her to give up her life of crime.

Talon however refused to listen and told the webslinger to meet her tomorrow at 9.pm at another building, before escaping with a parachute.

She went back to Peter and Harry's apartment with Spidey in hot pursuit.

She told Harry that she had postponed the trip to spend more time with him.

They then kiss and sleep together, unaware that Spidey is watching, which makes him even more determined to tell his friend the truth.

Next morning, Cheyenne and Harry invite Peter and MJ to spend sometime with them.

At ESU, they do some rock-climbing.

Cheyenne sees Peter lagging behind, but is suddenly astonished with others about his sudden ounce of strength that brings him all the way to the top.

MJ loses her grip and Cheyenne helps her back up, not seeing the look of suspicion on Peter's face.

Talon met Spidey again near a building where a convention was being held for an unbreakable security program.

The webslinger tries once again to convince to give up her life of crime, but Talon has had enough of Spidey's lectures and demands to know why he cares so much about what she does.

Spidey answers that he just does.

As they reach the building the NYPD spots them and opens fire with a helicopter and men with snipers.

Talon uses some flash bang grenades to delay them for a while and goes to the grating that leads inside the building only to have it sealed up by Spidey's web.

Talon tries to escape, but she is cornered by Spidey who attempts to arrest her, but she uses another grenade on him and hides.

Suddenly the NYPD helicopter opens fire on Spidey and while he is dodging it, he passes the place where Talon is hiding and some stray shells hit her leg.

Spidey suddenly calls out her name, when he sees her injured much to Talon's amazement and asks how he knew.

Suddenly more NYPD officers arrive and Talon limps away, but she is spotted by the headlight of a helicopter.

Spidey holds out his hand, asking to help her.

Talon after realizing that Spidey now knows who she is, refuses and instead drops down the side of the building and escapes.

Even though, she managed to doctor the injury, she would not be able to go on her crime sprees for a while.

Knowing that her cover was blown, she decided to leave town.

She called Harry giving him no explanation as to why she was leaving, only that she didn't know if she was ever going to return, much to his confusion. She was not seen again. 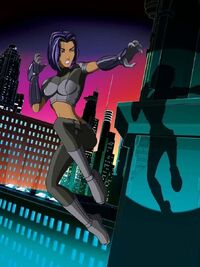 Cheyenne is an expert in climbing, gymnastics and bungee jumping which fits perfectly for her profession as a thief. She is also talented in martial arts which is shown when she proved more than a match for Spider-Man and is a brilliant strategist by all the plans of the places she robs on her desk.

She is also a talented inventor as she has several weapons and gadgets with her suit such as her googles, grappling hook and built in parachute.

Talon was friendly to people she met which is shown when she was introduced to Peter and Mary Jane and her feelings for Harry were genuine.

It is assumed that she hid her secret from him so as not to put him in danger, but she wasn't willing to give up her life of crime even for him.

She admired Spider-Man's pursuance of her, but couldn't tolerate the webslinger poking his nose in her personal life as it was nobody's business but her own.

Talon was voiced by Eve Jihan Jeffers. The trophy she tried to steal was a music award, which Eve had been nominated for but not yet won.

Many original characters on the series were inspired by other comic book characters. Talon was based on Black Cat and is specifically identified as such in the liner notes of the series' DVD release.

Retrieved from "https://marvelanimated.fandom.com/wiki/Talon_(Spider-Man:_The_New_Animated_Series)?oldid=80155"
Community content is available under CC-BY-SA unless otherwise noted.