Start a Wiki
Swordsman is a supervillain and former mentor to Hawkeye.

Swordsman tried to force the Avengers to accept him by defeating Quicksilver, but he was defeated by Scarlet Witch. However, Swordsman was able to escape.

Later, he ambushed and captured Captain America and tries to force the Avengers to make him their leader for Cap's life, but Quicksilver saved his leader and the Avengers were about to defeat Swordsman when Mandarin teleported him away. 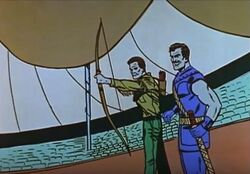 Then Hawkeye noticed that Sworsman was the same men who trained him in the circus, but they took separate ways when Swordsman turned out to be robbing the circus money.

Mandarin added technological devices to Swordsman's sword and used a projected image of Iron Man to make the Avengers believe that the Armored Avenger vouched for Swordsman to join the team. Mandarin ordered the now Avenger Swordsman to put a bomb in the Avengers Mansion, but he protested that he couldn't become the leader of dead Avengers, doesn't want the beautiful Scarlet Witch to die, and is opossed to merciless murder in general, so he tried to deactivate it but the Avengers arrived and thought he must be setting it. After fighting the Avengers, Swordsman escaped, but later returned to explain himself and left until he felt himself really worthy to be an Avenger.

Swordsman was voiced by Ed McNamara.

Swordsman didn't return to explain his actions and remained a villain for a while.

Retrieved from "https://marvelanimated.fandom.com/wiki/Swordsman_(The_Marvel_Super_Heroes)?oldid=84215"
Community content is available under CC-BY-SA unless otherwise noted.