For the Spider-Man and His Amazing Friends episode see "Sunfire".

The man known only as Sunfire is a mutant.

Little is known about Sunfire. Based on his costume, he appears to be Japanese.

Sunfire was taken as a slave on Genosha but freed by Gambit, Storm, Jubilee, and Cable.

He later joined the Brotherhood of Mutants under Magneto. 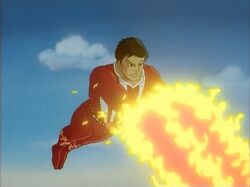 Sunfire is a mutant whose ability gives him pyrokinesis. He can generate fire that he uses as concentrated blasts. It also allows him the ability to fly. This makes him very similar to Human Torch.

Sunfire was voiced by Dennis Akayama.

His real name is Shiro Yoshida.

He has been a member of the X-Men.

Retrieved from "https://marvelanimated.fandom.com/wiki/Sunfire?oldid=63682"
Community content is available under CC-BY-SA unless otherwise noted.