A subway station is an area where passengers and board and disembark a subway train. In major cities, they are often located underground. 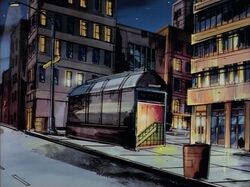 The Morlocks lured an angry mob to a subway station knowing that Jean Grey and Scott Summers would come to rescue them allowing them to capture them.

Retrieved from "https://marvelanimated.fandom.com/wiki/Subway_Station?oldid=66314"
Community content is available under CC-BY-SA unless otherwise noted.