As an actor Lee has been the narrator on The Incredible Hulk, Spider-Man and His Amazing Friends, "Pryde of the X-Men", and Fantastic Four; Cliff Walters on The Incredible Hulk; himself on Spider-Man; Frank Elson on Spider-Man: The New Animated Series; Stan on The Spectacular Spider-Man; himself on Marvel Super Heroes: What The--?!; General Wallace on Black Panther; Mayor on The Super Hero Squad Show; hot dog vendor on Lego Marvel Super Heroes: Maximum Overload; the future Tony Stark on Avengers Assemble; Stan on Ultimate Spider-Man and Hulk and the Agents of S.M.A.S.H.; Fred's Father on Big Hero 6 and Big Hero 6; and Stan on Spider-Man: Into the Spider-Verse. 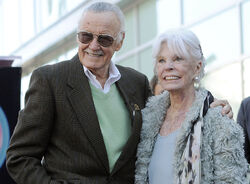 His wife Joan passed away on July 5th, 2017. The time after was surrounded by controversies concerning his care with rumors that he was being abused by his daughter J. C. and their associates.

Lee passed away at the age of ninety-five on November 12th, 2018.[1] Coincidentally, this occurred on the observance of Veterans Day, with Lee himself being an Army Veteran. The official cause of death was heart and respiratory failure while also suffering from aspiration pneumonia. He was cremated with his ashes being returned to his daughter.[2]