You may be looking for the real life Stan Lee.

Stan Lee is a highly imaginative person and businessman in an alternate universe.

Lee created several characters such as Spider-Man, Hulk, and the Fantastic Four. Unknown to him, these "characters" actually existed in various forms in alternate universes.

Spider-Man was so successful that it was even made into a television series. The actor who played Spider-Man/Peter Parker was taken by the interdimensional being Madame Web to help in the attack on Spider-Carnage, without Stan's knowledge. After the dark wallcrawler was defeated, the actor then took a real version of Spider-Man to his dimension to meet Stan Lee. 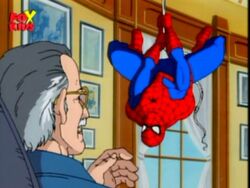 The actor Spider-Man then introduces the real Spider-Man to Stan Lee, who thinks he’s gone crazy. After Spider-Man takes Lee webslinging, he states that he’s always wanted to experience real web slinging and that Spider-Man has changed from a kid questioning his role as a hero, to a man who fully understands his true purpose in this world. After they arrive at the top of a building, Madame Web comes and takes Spider-Man home. Stan Lee then wonders how he’s going to get down from the rooftop. He jokingly remarks, "Maybe the Fantastic Four will come and get me down."

He also helped people in his universe understand the language of the Skrull.

When Stan meets Madame Web he asks who that exotic woman is. That's because she was voiced by the real Stan's wife Joan Lee.

This is the first animated version of Lee, though he did narration on Spider-Man and His Amazing Friends, The Incredible Hulk, and "Pryde of the X-Men".

Lee and Jack Kirby agreed to publish the adventures of the Fantastic Four as comics.

He and Kirby were forced by Doctor Doom to lure Mister Fantastic into a trap.

He saw Scott Summers and Jean Grey kissing on Christmas.

He claimed to be invited to the wedding of Reed Richards and Sue Storm, but was rejected.