Spider Seekers were small robots designed to hunt down, attack, and monitor the superhero Spider-Man.

Spider Seekers are able to fly and hover. They have a small camera in the center to transmit information back to its controller. They carry explosives and can go on suicide missions. 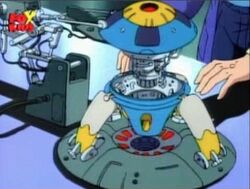 They were initially created by Spencer Smythe and commissioned by Norman Osborn. Their purpose was to seek out Spider-Man, hence their name. As Spencer was apparently killed, his son Alistair began producing them for the Kingpin.

Retrieved from "https://marvelanimated.fandom.com/wiki/Spider_Seeker?oldid=58624"
Community content is available under CC-BY-SA unless otherwise noted.