A Spider-Tracer is a small device designed by Peter Parker to track a person or object.

The tracers are small tracking devices that can be followed with a small monitor Spider-Man keeps in his belt. The devices have a sticky surface and can stick to almost anything. He did have to modify them to stick to teflon when the Mega Slayer had a stick-resistant coating. They are light weight and most people cannot tell that they have one on them. However, they cannot be tracked in sufficiently fortified places, like Kingpin's headquarters in the Chrysler Building. 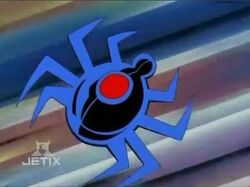 They were redesigned when he went to Counter-Earth though functioned the same way. Spider-Man was able to fire them from his wrist.

It is unknown how and when Peter Parker designed the tracers. He was seen using them early in his career as a superhero.

He sticks them to various foes when he cannot physically follow them with ease, such as Rhino and Tarantula.

Black Cat noticed that the hero put a tracer on her and quickly put it back on him without him noticing.

Since he did not have an engagement ring, Peter gave Mary Jane Watson a tracer in the meantime. This helped when he was captured and she was able to reverse the signal to track him.

The monitor can track them up to twenty miles away.

He modified them so he could track the devices with his Spider-Sense. He can sense them within a hundred-yard radius.

Ben Reilly designed his own that worked like miniature frisbees.

Mary Jane wears one as a necklace. This one is extra powerful so he can find it from farther away.

Daredevil can also track them if he concentrates hard enough.

He modified one to freeze Hydro-Man.

Retrieved from "https://marvelanimated.fandom.com/wiki/Spider-Tracer?oldid=75258"
Community content is available under CC-BY-SA unless otherwise noted.