The costume of Spider-Man is a set of red and blue tights worn by the superhero to hide his identity while providing maximum movement.

At one point, he wore a plain red body suit with a torn blue shirt over it. He wore it when Johnny Storm and Rick Jones flew over the city in the Fantasticar. 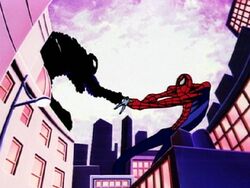 When Spider-Man encountered the alien symbiote, Peter had a dream that his costume and a black good fought over him. When he awoke, he found that he was wearing a black suit and hanging upside down in the middle of the city. He eventually found that the costume was an alien trying to take him over so he got rid of it.

His costume got all torn up when he became Man Spider. Luckily his mask fell off before he did. Mariah Crawford got his mask. When Kraven the Hunter and Punisher turned him back, she put his mask on before they could see his real identity.

After Venom and Carnage went to Counter-Earth, Spider-Man was blamed for John Jameson's disappearance. Firefighters blasted the wallcrawler with their hoses. A wall collapsed and when they dug into the rubble, they found the torn shreds of his mask. 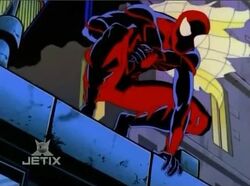 Peter went to Mister Fantastic and got a new suit. They was comprised of microscopic robots that was hidden in his watch. The new suit allowed him to turn invisible and could generate a sonic screech. It also came with a webbing cape.

The design seen on Fantastic Four was the one Scarlet Spider used as he was the protagonist of the Spider-Man comics at the time. But since the two series do exist in one continuity and Ben Reilly was only seen in an alternate universe, it can be assumed that Peter at one point wore that design.

Retrieved from "https://marvelanimated.fandom.com/wiki/Spider-Man_Costume?oldid=61427"
Community content is available under CC-BY-SA unless otherwise noted.