Spider-Man Cartoon Maker is a video game tie-in to the series Spider-Man. It is an educational game that allows players to create art.

The game was developed by John Semper, Jr., the story editor of the animated series, for Knowledge Adventure and Instinct Corporation. The game featured artwork, backgrounds, music, and sound effects from the series. 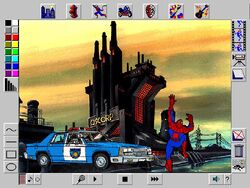 The player would place the characters into the backgrounds and choose from an average of three different animations. It featured nearly every single character from the show, including some that were dropped before the show's production such as Beetle. The player could then add props to the scene.

Spider-Man could be clicked on to explain all the available options. Players could have Spider-Man fight against his villains or just leap from roof to roof. Those with microphones could even narrate their own stories. Word balloons could be used for sound effects and dialogue. Users could also add their own music from their music libraries.

It was geared towards children and required minimal skill to use.

The cartoons could be saved and viewed by anyone without the program.

The game was released in 1995 for the Windows 3.1 operating system. As such, it is no longer able to play without an emulator.

The game has a 7.6 rating on the Internet Movie Database.

The game was followed by the X-Men Cartoon Maker from both Knowledge Adventure and Semper, and tied into fellow series X-Men. That game could be installed on top of this one allowing animations from both.

Retrieved from "https://marvelanimated.fandom.com/wiki/Spider-Man_Cartoon_Maker?oldid=79441"
Community content is available under CC-BY-SA unless otherwise noted.