Spider-Man is from the Non MAU series Spider-Woman.

Spider-Man is a superhero and ally to Spider-Woman. 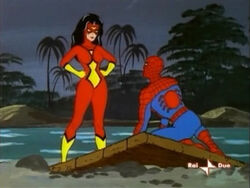 Spider-Man helped Spider-Woman and Justice Magazine investigate an alien invasion in Egypt. They learned that the mummy Khufu was behind it and stopped him.

He later helped Spider-Woman and the magazine when a movie, that was being filmed, encountered a giant spider.

Spider-Man was voiced by Paul Soles, who previously voiced the character in Spider-Man. Though there no known connections between the two series.

The first time Spider-Man ever appeared in a series not named after him.

Retrieved from "https://marvelanimated.fandom.com/wiki/Spider-Man_(Spider-Woman)?oldid=76515"
Community content is available under CC-BY-SA unless otherwise noted.