Spider-Man is from the Non MAU series Spider-Man: The New Animated Series.

Peter Parker, using the name Spider-Man, is a superhero who protects people in New York City. He is a student at Empire State University along with his on-again off-again girlfriend Mary Jane Watson as well as best friend and roommate Harry Osborn.

The early life of Peter Parker is unknown. He kept a picture of his parents Richard and Mary Parker as well as his Aunt May and Uncle Ben in his room.

At some point, he gained spider-like superpowers and began fighting crime as Spider-Man. He began taking pictures of himself and selling them to The Daily Bugle for money. Unfortunately, editor J. Jonah Jameson used them in his campaign to turn the city against the hero while also not paying Peter very much for them. 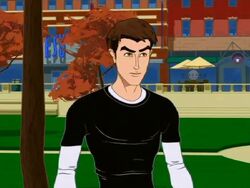 Norman Osborn died through mysterious reasons. Peter seems to know what happened, though Norman's son and Peter's friend Harry Osborn blamed Spider-Man claiming him to be a murderer.

Peter was taking photos of a protesters angry about being kicked out of their apartments. He was then confronted by janitor Lewis Wyler who asks him what he thinks on the whole incident with the protesters. A day after that there was a priceless ruby in the Manhattan museum when Turbo Jet came out of nowhere and uses a magnetic pull to grab the ruby and sped off. Peter was there taking photo's for The Daily Bugle and when he saw this he quickly donned the Spider-Man costume and chased after him. The suspect had gotten away after Spider-Man stopped to save nearby civilians.

Soon after the protest committee found the ruby and turned it in for the reward money. This donation was still not enough to save the apartments. Spider-Man fought Turbo Jet again where the Robin Hood-like figure attacked and injured a guard. This time the book that Turbo Jet stole also made it into the hands of the protesters. He watched the apartments and found that Turbo Jet was the janitor Wyler. He followed him to find him meeting a buyer. He confronted Wyler but when the police interrupted the thief escaped.

Soon after Harry had his speech for the facility when Turbo Jet appeared to steal a precious telescope belonging to Galileo being donated. Spider-Man then arrived on the scene and was chasing after Turbo Jet when he grabbed Mary Jane Watson as a hostage. Peter then defeated Turbo Jet and kissed Mary Jane.

Later Peter was on his computer in his apartment calculating his apartment expenses when a attack helicopter was seen shooting a moving limo. He then stopped the helicopter to only find out it was set up so they could find him. They men exiting the helicopter claimed to be the FBI. They told Spider-Man that there is a super chip called TX-1 that could decrypt digital bank codes to steal money. They said that Spider-Man would be rewarded for his heroics.

Meanwhile, Mary Jane was doing a production and Peter wa invited along with Harry Osborn. On the very next day, Spider-Man infiltrated the tower and stole the chip. He then gave it to the mysterious limo later then saw Kingpin and hands the chip to him. The limo took off and Spider-Man was left there feeling ripped off. He then headed to Mary-Jane's production when the real FBI grabbed him. They told him that Spider-Man stole a chip from them and Peter realized he was scammed. Spider-Man then stopped Kingpin and returned the TX-1 to the FBI.

Later, three nano technological-based thieves called Pterodax were trying to rob priceless incyrption gems. Spider-Man then arrived on the scene beating up two of the thugs. The leader chucked out a woman trying to get Spider-Man to save her, giving Pterodax time to escape.

Meanwhile, Mary Jane wanted to go to the movies with Peter. Peter then took his photographs of Pterodax to Empire One news and sold them. Peter met a young woman named Indira Daimonji. She helped Peter sell his photo's to Indy's manager in hope she will get on the evening news.

he next day Peter went back to Empire One to thank Indy for her help. Pterodax arrived at that moment taking Empire One hostage for putting Peter's news photo's on the news. They placed bombs around the station and wanted Spider-Man there. Peter was also taken hostage and managed to sneak away to get into his costume. Spider-Man defused the bombs quickly and saved the hostages. He then left and switched back to his casual peter clothes and left Empire One and kissed Indy. Mary Jane had just arrived and saw the kiss.

He liked Mary Jane and Indy and spent time dating Indy while Mary Jane dealt with her feelings for him.

He came across the Gaines Twins and was hypnotized, not knowing he defeated them and sent them back to prison. He then saw the Pterodaxs take hostages above ESU science center and defeated them. However, the ESU sign fall off and land on Harry's arm giving him a cast. Some time later, Kraven the Hunter and Silver Sable were looking for revenge. Spider-Man then defeated Silver Sable but Kraven got away. Later, Spider-Man revealed his identity to Mary Jane. Kraven took her hostage then killed her.

Spider-Man went out to kill Kraven. He fought Kraven and was about to kill him when he saw outside the ESU science sign when he remembered it was ripped off. He asked Kraven when they lost fight. Spider-Man realized he never defeated the Gaines Twins and that everything since their battle was an illusion.

Spider-Man fought the twins again and was on the rooftops with the sister. She then hypnotized him, but it failed and he threw her off the building. The other brother was behind him laughing and then the sister came and revealed that they again tricked him. He had thrown Indy off the building instead.

Peter, Harry, and Mary Jane were then at the hospital and were told that she may never regain consciousness. Spider-Man became a wanted criminal with the city turned against him. Spider-Man fought them again, this time waiting until they were separated and weaker. This time, he defeated the twins, resulting in the both of them seemingly dying in an explosion.

Later, Peter decided to quit being a superhero. He put his costume into a bag and threw it into a river, walking away from Spider-Man for good.

Spider-Man was voiced by Neil Patrick Harris, who reprised the voice for Spider-Man: Shattered Dimensions.

The series was designed so that it could follow up on the first Spider-Man film. Such references include Harry Osborn thinking that Spider-Man killed his father, and a reference to a kiss that occurred in the movie. The series also used the film's use of organic webbing rather than web shooters.

It had been intended that the series would get a second season and he would become Spider-Man once more. Unfortunately, the series was cancelled and it ended on a down note.

Retrieved from "https://marvelanimated.fandom.com/wiki/Spider-Man_(Spider-Man:_The_New_Animated_Series)?oldid=67334"
Community content is available under CC-BY-SA unless otherwise noted.