Spider-Man is from the Marvel Productions Universe.

Peter Parker is a superhero using the name Spider-Man. He is a member of the Spider-Friends.

Before forming the Spider-Friends, Spider-Man fought crime on his lonesome, whilst trying to make a living as a freelance photographer working for J. Jonah Jameson, the fearless publisher of The Daily Bugle, an anti-Spider-Man newspaper.

Spider-Man's origins date back to his high school days. After a bite from a radioactive spider in a demonstration in radiation, Peter realized he had gained the spider’s abilities, including the ability to cling to any surface, a sense of precognition which he later deemed his Spider-Sense and super enhanced speed, agility and strength.

Immediately hoping to cash in on his new gifts, he went to the local wrestling show and upset the champion with an embarrassingly easy victory. A talent agent spotted him and wanted to put him on television. Making himself a costume so no one would recognize him, Peter even gave himself a stage name: Spider-Man. But good things seldom last for Peter Parker.

Upon seeing a robber running towards him in the backstage area, Peter let him pass, selfishly thinking of no but himself. Later that evening, the robber shot and murdered Peter's Uncle Ben. Realizing that with great power comes great responsibility, Peter apprehended the robber and continued to fight crime as Spider-Man.

Peter was in a romance with Betty Brant, but also appeared to be in love with Medusa. 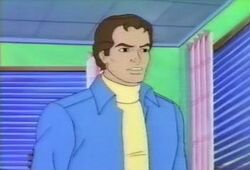 Peter formed the Spider-Friends with Firestar and Iceman. They lived with his Aunt May while they attended Empire State University. Both Peter and Bobby felt romantic feelings for Angelica, but both failed to act upon them in fears that it would ruin their friendships. They continued to fight crime together as the best of friends.

Retrieved from "https://marvelanimated.fandom.com/wiki/Spider-Man_(Productions_Universe)?oldid=82048"
Community content is available under CC-BY-SA unless otherwise noted.