Spider-Man is a video game tie-in to Spider-Man. It has also been known as Spider-Man: The Animated Series.

Doctor Octopus, Green Goblin, Alistair Smythe, and an alien Spider-Slayer escape from the Ravencroft Institute for the Criminally Insane and terrorize New York City. Spider-Man fights across the city to defeat them in areas including a laboratory, construction zone, the Brooklyn Bridge, a Coney Island funhouse, city streets, J. Jonah Jameson's penthouse, and the asylum.

The game features events that never occurred in the series, such as Green Goblin being in the asylum, and is thus canon. 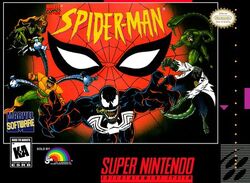 The game was developed by Western Technologies Inc. and published by Acclaim Entertainment and their subsidiary LJN.

The game is a side-scrolling action game.

The designs are based on the series.

The game was released onto the Sega Genesis and Super Nintendo Entertainment System in 1995. The two systems share the same story though the gameplay, levels, and enemies differ.

The audio was provided by Bitmasters. It features no voice actors.

Though not a direct sequel, the 2000 Spider-Man video game also tied into the series as well as Spider-Man Unlimited. Like this one, that game was also non-canon.

Retrieved from "https://marvelanimated.fandom.com/wiki/Spider-Man_(1995_Video_Game)?oldid=79507"
Community content is available under CC-BY-SA unless otherwise noted.