The word "New" was added to the title to differentiate itself from Spider-Man, which is commonly called Spider-Man: The Animated Series.

The story follows the death of Norman Osborn. Peter Parker, Mary Jane Watson, and Harry Osborn attend Empire State University. Peter and Mary Jane try to establish a relationship together though without success. At first it is because of Peter's superhero duties, but later it is because Peter begins dating Indira Daimonji. Meanwhile Harry craves revenge on Spider-Man, whom he blames for the death of his father. Peter faces the usual assortment of villains such as Lizard, Kraven the Hunter, and Electro while trying to maintain a job and his studies. However, he faces two psychic twins that ruin everything in the wallcrawler's life, causing Peter to give up being Spider-Man and try to live a normal life.

The series ended on a cliffhanger with Peter giving up his superhero life. The theoretical next season would obviously had seen him return to duty, but the series was cancelled.

This series featured a far more mature version of the character than typically seen on television for any animated comic book adaptation. Throughout the series, characters are clearly killed, rather than the usual ambiguous disappearance, and several characters are strongly implied to have had sex.

When Sony Pictures Entertainment got the film rights to Spider-Man in 1990, part of the deal included having their own animated series that would use the same source material as the films. This meant that the in-production series that followed Spider-Man had to be completely restructured becoming Spider-Man Unlimited. Unlimited was originally going to be crudely animated adaptations of the early comics, known today as motion comics, to be a cheaply made series made for contractual reasons. This show prevented that series from using the same stories and Unlimited had to drastically and constantly change the premise of the story.[1]

The series executive producer was Brian Michael Bendis who wrote Ultimate Spider-Man and later worked on the animated series Ultimate Spider-Man. It was produced for Sony Pictures Televison who had purchased the film and television rights to the character. Sony held the rights throughout The Spectacular Spider-Man but returned them to Marvel Entertainment when The Walt Disney Company purchased Marvel as they wanted to retain the film rights.

Initially it was inspired by and an attempt to adapted the Ultimate Spider-Man series. The success of the movie caused the series to change to more closely follow the film.

Peter was designed to be less of a geek and more hip in order to fit with the network. Likewise, the character of Aunt May was not included, except in photographs, as there were fears an older character would put off the younger target audience.

The producers found that the more relaxed standards of MTV allowed them more creative freedom than usually allowed for a Saturday morning cartoon show.

Every cellphone in the series was a style available then from Sony Ericsson and the ringtones were from Nokia.

MTV decided that the ratings for the series were insufficient to warrant a second season, leaving the series to end on a cliffhanger.

Director Brandon Vietti stated that had the series gone on he would have used Mysterio, Vulture, and more of Kraven.

The series only lasted thirteen episodes, the same length as Silver Surfer, Spider-Man Unlimited, and The Avengers: United They Stand. The series began airing on July 11th, 2003 and ended on September 12th, 2003.

Spider-Man aired out of production, and chronological, order. "The Party" was the first to air, though it takes place eighth in chronology. The order was corrected for the DVD release.

Ironically, "Mind Games, Part Two", the series finale, aired the same day as the announcement of Spider-Man 2, which also featured Peter giving up his life as Spider-Man as a subplot.

Many of the villains that Spider-Man faced were original to the series, though closely related to existing comic book characters. Talon is based on Black Cat, Turbo Jet on Rocket Racer and/or Blue Streak, Shikata on Elektra, and Pterodax on Vulture.

Only five comic book villains appear in the series: Electro, Lizard, Kingpin, Kraven the Hunter, and Silver Sable. The X-Men are mentioned once by Peter, the only other comic book character reference. One more possible reference is someone with the username "GS122", which would most likely be a reference to Gwen Stacy who died in Amazing Spider-Man issues #121 and #122.

Indira "Indy" Daimonji, voiced by Angelle Brooks, was created specifically for the series, in a role as Mary Jane's rival similar to Gwen Stacy.

Michael Clarke Duncan reprised his role as Kingpin from the live-action Daredevil film, even though that film was from Sony's rival 20th Century Fox. Coincidentally, The Walt Disney Company would later purchase both Marvel Entertainment and Fox.

Edward Asner, Keith David, and Clancy Brown all went on to play on The Spectacular Spider-Man as Ben Parker, Tombstone, and George Stacy respectively. Michael Clarke Duncan went on to voice Groot on Ultimate Spider-Man.

The computed generated imagery was produced by Mainframe Entertainment, best known for ReBoot and Beast Wars. ReBoot was the first series to be completely animated using computers and this was Marvel's first using this technique. Previous series X-Men, Iron Man, Spider-Man, and Silver Surfer used traditional animation with computer generated elements. Subsequent series Fantastic Four: World's Greatest Heroes and Iron Man: Armored Adventures would also be computer generated while others would use the earlier technique of combining the two.

This presented some problems as they were unable to render a large number of characters on screen at once, or many different character models. Spider-Man would often have the same cuts and damage in different episodes. The producers said that the cuts were always under the top character layer.

The look was designed to appear like traditional cel animation to look more appealing. The design was to appear closer to the Ultimate Spider-Man comic incarnation.

Mary Jane Watson's hair is shorter than the comics or previous series as it was difficult to have long, flowing air. This is also why Kraven does not have his signature lion's mane vest but instead a leather jacket. Peter was originally was supposed to wear baggier clothing to hide his muscles and costume but this presented problems, similar to Mary Jane's hair, so they were made tighter and form-fitting.

Many character models were reused for others, with usually just a change of outfits. For example, Frank Elson is a reworked version of the twins from "Flash Memory".

In the episode "The Party", the close-up shot of the olive entering the martini started what the producers called the "Martini Shot." In order to make transitions more interesting, they wanted to do this shot and trick audiences into thinking it was meteor that would slowly reveal itself to be an olive. They then decided that every episode should have some kind of interesting transition like that, which usually became the most difficult shot. Most are usually one shape that transforms into something else similar or the background around a character changing. Another example is the transition between when Doug is driving the limo and putting condiments on his hot dog. For the actual martini shot, there were twenty-three layers in order to get the movement of the liquid. A bug forced the glass to be split into two layers, though technology since could allow for a similar shot with a one-layered glass. It only lasts ten seconds. It is one of the most complex shots Mainframe ever did up to that point. 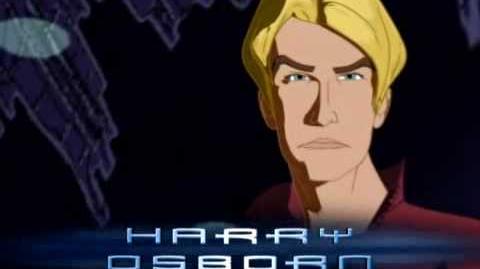 The series was designed to follow the events of the first Spider-Man movie. Events of the film are referenced, such as Harry Osborn accusing Spider-Man of killing his father, the climax of the movie. It does not follow the movie series continuity, however, since Dr. Connors is apparently killed in the series but is alive in the second and third films.

Also, the series title used the same font style as the film.

Additionally, Michael Clarke Duncan returned as the Kingpin from the Daredevil film, despite being made by 20th Century Fox.

Critics were divided on the villains and other original characters. Many expressed their desire to see the character's vast rogue gallery and supporting cast shown rather than series-exclusive versions. Others felt that all the characters worked despite their originality. Though it was pointed out that few returned, with a villain-of-the-week feel, and many were disappointed that fan-favorites like Lizard and Electro were killed. Several critics were confused as to why Indy was introduced rather than Betty Brant or Gwen Stacy.

The series has a 7.0 on the Internet Movie Database and four stars on Amazon.

The series featured four volumes and one complete series releases released on VHS, DVD, and UMD.