Peter Parker, also known as Spider-Carnage and formerly known as Spider-Man, is an alternate universe counterpart to Spider-Man. He is the combination of one version of Spider-Man and the Carnage symbiote. Unlike all other versions of the costumed hero, this Spider-Man seeks vengeance and a means to destroy all of reality.

Little is known about the early life of this version of Peter Parker. It can be assumed that his life followed the primary universe version.

At some point, Aunt May had died putting Peter Parker into a state of grief. She was buried next to Uncle Ben. 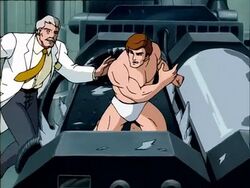 Spider-Man was cloned by Miles Warren. Following the procedure one escaped, which was originally thought to be the clone.

The one who escaped changed his name to Ben Reilly, dyed his hair blonde, adopted a different costume that had impact webbing in addition to web shooters, and called himself the Scarlet Spider. The other maintained the Spider-Man identity and Peter Parker name thinking he was the original.

However, this universe's Dr. Curt Connors found that Ben may have been the original and that Peter was the clone, causing Peter to deeply resent and even hate Ben. Peter began living in denial and continued calling Ben the clone. 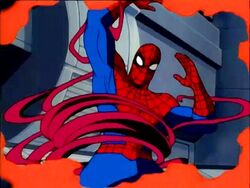 One time Ben went after Kingpin. Peter followed and eventually attacked Ben intending to kill him. During the fight, an open interdimensional portal opened by Jonathan Ohnn let a Carnage symbiote through. The symbiote sensed Peter's rage and attached itself to him, and thus Spider-Carnage was born.

With the means to exact his revenge, Peter devastated New York City. With assistance from that world's Kingpin, Spider-Carnage planned to use interdimensional portal technology to destroy every single reality, but kept his true intentions hidden from Fisk. He also used that world's Hobgoblin and Green Goblin to carry out his various tasks, such as destroying buildings and gathering equipment. 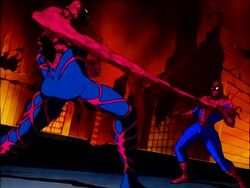 Ben had teamed up with four other Spider-Men to fight the evil Peter. Ben and the others were successful in stopping Peter's plan but Spider-Carnage got away to another dimension, the armored Spider-Man's world. Only one could follow him, so Spider-Man was chosen.

Spider-Carnage teamed up with that world's Wilson Fisk, Peter Parker's lawyer, and again tried his plan of destroying reality, except this time he would have to do it one dimension at a time.

Spider-Carnage then set out to continue his quest for revenge. Spider-Man was able to stop him by letting that world's still living Uncle Ben talk to him. 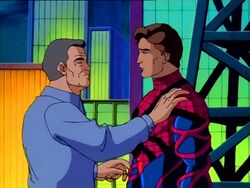 Afterwards, Ben and the other Spider-Men were returned to their respective dimensions. 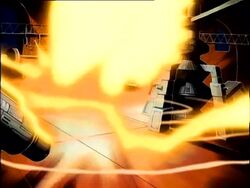 In an alternate timeline Spider-Carnage was successful in destroying the universe. As the blast reached the Beyonder's dimension he stopped and then reversed time to a point where he and his assistant, Madame Web, could train other Spider-Men to stop him. The Spider-Men were successful and the timeline was erased.

Like Spider-Man, Spider-Carnage has all the relative powers of a spider. His physical strength is relative to that of a spiders. He has Olympic-like agility and can stick to just about anything. In addition, he has an inherent knowledge of spider webbing, knowing which chemicals to combine in which proportions. His most unique power is his Spider-Sense. This is almost precognitive in nature and allows him to sense danger in any form.

This Spider-Man also has all the powers, and presumably memories, of the Carnage symbiote. He can create axes with his hands, knives with his fingers, extend his arms, and produce multiple tendrils. He can also morph the symbiote so that it appears to be his old costume.

Spider-Carnage possess a keen scientific mind. Peter is able to put his webbing into cartridges which he puts in complex web shooters that can spray the webbing in a number different ways. He was able to devise a method that would destroy every single dimension at once.

This Peter Parker hated the thought that he was cloned. He held a deep hatred for Ben to the point of attacking him. This is the reason why the Carnage symbiote attached to him, much like why the Venom Symbiote attached to Eddie Brock to form Venom. He hated himself and everyone around him and wished to see everything destroyed.

However, due to his upbringing he did the right thing in the end and sacrificed himself.

Spider-Carnage is voiced by Christopher Daniel Barnes, who voiced all the alternate Spider-Men.

He is the final villain of Spider-Man.

It is never said whether or not this is the same Carnage Symbiote that Venom pushed into Dormammu's realm. However, since Carnage reappeared in Spider-Man Unlimited it can be assumed that this symbiote is from an entirely different universe. This is further enforced by the fact that Cletus Kasady/Carnage was planned to appear in the unproduced sixth season as Jack the Ripper.

Though it was never revealed within Spider-Man whether Spider-Carnage or Scarlet Spider was the clone, a script segment from Spider Wars revealed that Spider-Carnage was in fact the real clone.

Ben was ultimately revealed to be the clone. The storyline was memorable but received mixed reactions from fans.

It was Ben who the Carnage symbiote attached itself too, requiring Peter to help save him.