Spellbound is a short film. In it, Spider-Man and Iron Man face off against Loki.

Spider-Man swings through the city. He lands on a rooftop and is joined by Iron Man. Together they face off against Loki.

Loki readies his scepter and fires. Spider-Man and Iron Man leap out of the way. The blast explodes behind them.

Iron Man lands and readies his repulsor. However, he is blasted back by another blast. He comes to a halt across the roof.

Spider-Man lands near him and examines him. He then runs to face off against Loki. Loki also runs forward, twirls around, and fires again hitting Spider-Man.

The hero drops then slowly rises, his eyes glowing blue. Loki calmly walks behind him. He stops and looks at Iron Man, who is slowly rising. Spider-Man turns to see and Loki points at him.

The scepter flies out of Loki's hand into Iron Man's. Loki looks shocked. Spider-Man stands recovering himself. He blinks and the blue disappears from his eyes.

They stare at Loki then walk forward. Spider-Man grabs the scepter out of Iron Man's hand and walks forward. Loki slowly backs away as the glow of the scepter comes nearer.

Later, Loki's eyes have turned blue. He looks around and flaps his wings like a chicken. He struts forward bobbing his head. He scratches his foot on the ground and walks around.

Marvel Entertainment and Funko collaborated to bring a series of short films with this one being the first.

The characters are unvoiced, relying on visuals.

Loki and his scepter are based on the versions seen in the Marvel Cinematic Universe. 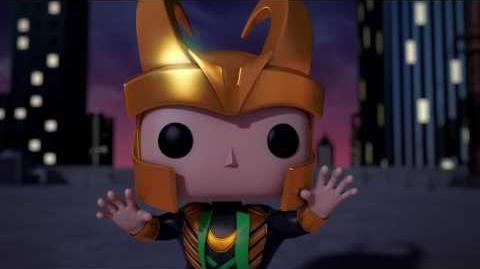