A space station is a space faring vessel designed to remain stationary either deep in space or in orbit above a planet. They are capable of holding large groups of people, acting as a port or even a city.

Space stations have existed for as long as civilizations have gone to space.

Silver Surfer blew up an asteroid but the debris was going to hit a station. He destroyed the largest debris but it broke up damaging the station. He boarded it trying to help but the people there hated him as he brought Galactus to their planets. 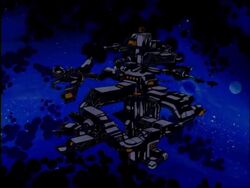 Once, Silver Surfer had a dream that he found Shalla-Bal on a space station but they were attacked by Galactus.

Retrieved from "https://marvelanimated.fandom.com/wiki/Space_Station?oldid=68022"
Community content is available under CC-BY-SA unless otherwise noted.