The Solomon R. Guggenheim Museum is an art museum in New York City.

During the Atlantean Invasion of New York City, the armies of Atlantis destroyed the building. 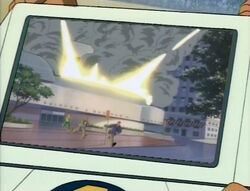 When the Skrulls built a video game for the Fantastic Four, they included the Guggenheim's likeness. In the game, Skrull ships destroy the building as people ran.

Footage from "Incursion of the Skrulls" and "Now Comes the Sub-Mariner" featuring the Guggenheim is the same.