Silvermane is from the Non MAU series The Spectacular Spider-Man.

Silvio Manfredi is a deposed crime boss known as Silvermane.

Little is known about the early life of Silvio Manfredi.

He once ruled New York's organized crime. Apparently, due to Frederick Foswell's exposé on his activities, Sivermane was indicted by the federal government and put in jail for twelve years. His daughter Sable Manfredi was put in charge of his criminal empire, but it eventually collapsed and Tombstone took over. ("Accomplices")

When Silvermane was about to be released from prison, a Gang War erupts to secure dominion over New York's criminal empire. On his behalf, Sable attends to a private auction to bid on a drive possessing the specs to mass-produce impenetrable skin armored soldiers. Ultimately, none of the parties end up attaining the specs. ("Accomplices") 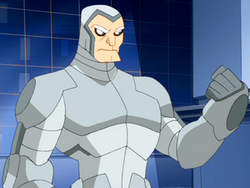 Silvermane is finally released from prison, and resumes control of his operations. He is summoned for a meeting at the Metropolitan Opera House with Tombstone and Doctor Octopus on Valentine's Day. Silvermane argues that the Manfredi family had ruled New York for years and he wants to take his empire back. Tombstone claims that a criminal empire should be ruled like a business, whereas Doctor Octopus protests that it should be addressed as a science. A dispute breaks out, and the parties argue over who called the meeting, all the while accusing each other. At that point, Hammerhead knocks out Silver Sable and instigates a fight. Silvermane activates a hidden hydraulic exoskeleton that boosts his strength and takes on the Big Man. Tombstone claims that they were all tricked by Hammerhead, but Silvermane dismisses his throwing blame on a stooge, and unleashes an energy blast. Doctor Octopus eventually decides to turn on Silvermane as well, and as soon as Spider-Man steps in, the four fight each other.

The ensuing fight extends to the exterior of the Metropolitan Opera House, attracting curious spectators. Silvermane claims to be unimpressed with Spider-Man and knocks him around a few times. He grabs him and tries to crush him. Spider-Man blinds him with his webbing, but this doesn't divert Silvermane. So, Spider-Man pulls off his hydraulic servos, rendering Silvermane powerless. Doctor Octopus even tries to sever him, but gets lure away by Spider-Man. After the fight is over, Silvermane is carried into a van by the police. ("Gangland")

Silvermane is incarcerated in Ryker's Island, and when Spider-Man is trapped inside to test the Vault's security system, the Green Goblin releases the prison's inmates. Silvermane proposes an alliance between the convicts, and joins forces with the Enforcers, and a robot duplicate of Mysterio and take on the webslinger. Shortly after, Rhino and Molten Man join the hunt, but they are ultimately trapped in the Vault's tranquilizing gas store room, where they get knocked out and eventually returned to their confinements. ("Opening Night")

Silvermane was voiced by Miguel Ferrer.

First animated version to give him his cyborg body. The previous two were powerless.

Has no connections to Silver Sable.

Retrieved from "https://marvelanimated.fandom.com/wiki/Silvermane_(The_Spectacular_Spider-Man)?oldid=88370"
Community content is available under CC-BY-SA unless otherwise noted.