Silver Surfer, formerly Norrin Radd, was once one of Galactus' heralds. As Norrin, he was next in line to lead the people of his homeworld until he made a deal with Galactus to save his world. As Silver Surfer, he became one of the galaxy's most feared figures until he turned against his master eventually becoming one of the galaxy's greatest heroes and member of the Avengers. 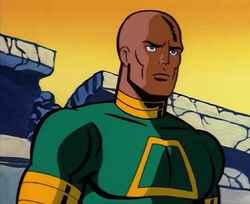 Norrin Radd lived on Zenn-La and was the lover of Shalla-Bal. He was the disciple to the Master of Zenn-La and rumored to be next in line.

He dreamed of going out into space like the Zenn-Lavians before the Enlightenment. 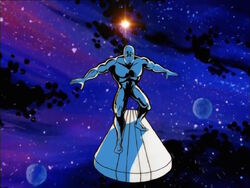 Just as the Watcher has warned, Galactus has arrived at Zenn-La to consume its energy. Norrin Radd sacrifices himself by offering to serve as Galactus' herald, whose job it will be to scout out planets without intelligent life so that Galactus won't destroy any civilizations. On the upside, Galactus gives Norrin a portion of his powers, turning him into the Silver Surfer. On the downside, the transference of powers removes Norrin's memories and his moral convictions!

With no memories, the Silver Surfer finds world after world for Galactus to devour, but the herald is troubled by the destruction. The evil Thanos uses Ego, the Living Planet to invade the Surfer's mind, intent on finding the secrets of Galactus within. The resulting mental battle unleashes the Surfer's memories and he goes to confront Galactus.

When Galactus decides to attack the Earth, the Surfer rebels, attacking the world-eater. Although the Surfer cannot harm Galactus, he is allowed to live, though exiled on Earth.

Norin Rad was once a peaceful from a world that aimed to spread its message of peace throughout the cosmos. When his world was on the verge of being consumed by Galactus, Rad offered a trade to the devourer of worlds. If Galactus spared his world, Norin would become his herald, and roam the universe to find planets for Galactus to feed upon. 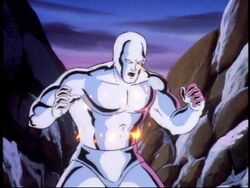 After seeing the life on Earth, The Surfer pleaded with Galactus to spare it, and fought him in battle. Once over, Galactus forbade The Surfer from leaving this galaxy, and Surfer remained trapped on Earth.

Dr. Doom attempted to steal his power cosmic twice, but with the help of the Fantastic Four, he managed to regain them.

At some point, Silver Surfer joined the Avengers. When Ant-Man ran the team, there was a painting of him next to Hulk.

Back into the Cosmos

Silver Surfer was eventually able to leave Earth and travel the cosmos once again. 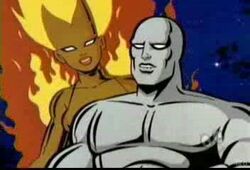 When he gets there, he discovers that the planet has been moved, and he is now alone in space! The Surfer vows to find Zenn-La, and his beloved Shalla Bal. 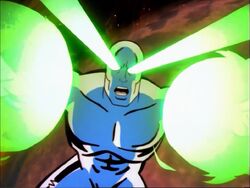 Silver Surfer possesses the Power Cosmic which was granted to him by Galactus, making Norrin one of the most powerful beings in the Universe and the most powerful of all superheroes. He has the ability to absorb and tap ambient cosmic energy into his body at will, and expel those energies violently, or in more subtle ways. He can channel beams of energy through his hands with sufficient destructive force to destroy planets easily, or wield the energies with such finesse as to restructure the molecules of the natural dyes within a plant to change its color. The Silver Surfer has enough strength at his base that has let him over power beings even in a weakened state. Silver Surfer's silvery "skin" was designed to easily withstand the rigors of deep-space travel, and thus far, it has proven to be virtually indestructible. Silver Surfer can shift himself into hyperspace, a dimension in which velocity is not limited by the speed of light. The Silver Surfer has Full mental and physical control over his power cosmic. He also has an affinity for the life-energies of living beings, and can use his cosmic energies to boost the natural healing powers of a wounded individual, even if they are near-death. When further Augmented with the Power Cosmic, Silver Surfer's strength can reach near infinite levels, enough physical strength to confront beings like Thanos though no where near powerful enough to confront his former master Galactus.

While on Zenn-La he spent his time dreaming of going into space. While in space he dreamed of going back to Zenn-La.

While under the control of Galactus he felt neither pity nor remorse. When his memories were reawakened he felt deep regret for the sins he committed and tried to atone for them.

When he was trapped on Earth he began to resent the humans and their actions. He resented being stuck on the planet and felt more kinship with the animals.

Silver Surfer was voiced by Robin Sachs in the first season of Fantastic Four, Edward Albert in the second, and Paul Essiembre on Silver Surfer.

On Fantastic Four Silver Surfer had a design that made him look as though he were wearing underwear. On Silver Surfer his body was one piece, as if naked.

The idea that Silver Surfer is involved in the creation of the Fantastic Four is original to the series.

Had Silver Surfer continued it would have directly contradicted the events of Fantastic Four. He would have undone Thanos' actions. He would return to Zenn-La but Shalla-Bal would sacrifice herself to save it. In his grief he would try to put an end to the Kree-Skrull War. He would return to Earth with Nova where he would try to force the humans to act as he thinks they should. This would anger the newly formed Fantastic Four.

While trapped on Earth, he becomes one of the founding members of the Defenders along with Hulk and Namor.

When he escaped Earth he went to Zenn-La and found it devastated by Galactus and Shalla-Bal taken back to Earth by a demon. He returns to rescue her and defeats the demon. Before she is returned to Zenn-La, Silver Surfer gives her some of his powers and she uses it to restore the plant life on the planet. When he eventually returns to the planet she has been made empress of the planet and unable to renew their romance. However, this planet and Shalla-Bal turned out to be reproductions created by Galactus so Silver Surfer would have a home. The real ones had been destroyed in 1940s Earth time.

Silver Surfer made peace with Galactus by saving Nova from the Skrulls.

He began a romance with Nova. Her feelings caused her to question her role as Galactus' herald. She eventually died in a conflict with another herald.

He had a romance with Alicia Masters. When it ended they remained friends.

He was briefly bonded to and controlled by the Carnage Symbiote, who wanted revenge for the destruction of its homeworld.