She-Hulk, also known as Jennifer Walters, is Bruce Banner’s cousin and ally to the Hulk.

When they were children, Jennifer and Bruce were good friends. However, he disappeared after the Gamma Reactor accident. She went to school to become a lawyer. 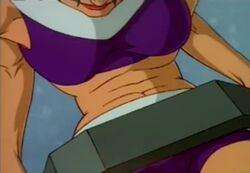 When Bruce, while on the run, came to her, she was captured by Doctor Doom looking to capture Hulk. She was transformed into She-Hulk after a blood transfusion from her cousin gamma-irradiated her blood. With her super strength, good looks and a new found confidence in herself, she traveled to New York City with Bruce, as he searched for a cure for the both of them. After attempting to woo the Thing, she realized that he still loved Alicia Masters. She also realized that someone like her couldn’t accompany Banner on his quest for a cure, as her appearance made it too difficult for him to stay hidden. She returned to Washington, D.C. and continued to practice law.

She didn’t see Bruce again until she represented him in court. After helping Hulk defeat Leader and Gargoyle, she decided to accompany him for his search for a cure, and the two went on the road, together.

At some point she joined the Avengers. She assisted the team and worked with Captain America when Ego's destructive force damaged the planet. She also helped Iron Man, Hercules, and the Inhuman Crystal stop Doom when he stole the power of Silver Surfer.

Jennifer has powers similar to her cousin. She has incredible strength, speed, reflexes, agility and durability in addition to green skin. However, unlike her cousin she retains her average intelligence and cannot revert back to her normal human form.

Jennifer Walters was shy and meek woman who was described as a wall flower by her classmates. She's a type of person that doesn't stand out and generally tends not to voice strong opinions. She is focus, quiet, and attentive.

As She-hulk, she loved being the center of attention. She-Hulk is self-confident, assertive, very flirtatious, and a spontaneous thrill-seeker.

She-Hulk was voiced by Lisa Zane in season one and Cree Summer in season two of The Incredible Hulk. She was unvoiced in Fantastic Four.

For the second season, her designed was changed to make her muscles less bulky and more feminine though this was not always consistent. In the Fantastic Four, however, she appears to be bulky.

The first version of the character to be a main character on a series.

Growing up, Jennifer was meek and mousy with little confidence.

While they were children, Jennifer would spend her summers at Bruce's house. They would spend time at the library, to get away from Bruce's abusive father and sometimes sneak around to spend the night there.

Doctor Doom had no part in her origin. She was defending a gangster who was turning state evidence. The crime boss he was turning on shot her hoping to stop her client. Bruce fought off the gangsters and, realizing she would not make it to the hospital, gave her the transfusion. The police thought Bruce was a suspect and he ran off. The gangsters tried to kill her a second time which triggered her transformation.

The gangster who caused her transformation tried to steal robot parts from Stark Industries but was stopped by She-Hulk. He tried to kill her with the robot parts and a drill, but ended up killing himself in the process.

She initially kept her dual identity a secret, pretending to be two different people to her father.

Michael Morbius cured her of a lethal blood disease, allowing her to gain control over her transformations. In return, she defended him in court for his vampire killings.

After joining the Avengers, she was transported to Battleworld by Beyonder to be part of the Secret Wars along with her cousin. Rights issues kept them from being involved with Spider-Man, where Hulk was replaced with Lizard.

Thing stayed behind on Battleworld so She-Hulk joined the Fantastic Four in his place. The Avengers allowed her to be part of both teams.

She stopped a radiation leak aboard the S.H.I.E.L.D. Helicarrier. This caused her to remain permanently changed. She was fine with the change as she preferred her She-Hulk form.

She was hypnotized into joining the Circus of Crime. Spider-Man helped her defeat the hypnotist.

For a time she was aware she is a comic book character and would break the fourth wall, similar to Deadpool.

Jennifer also has a grey form. This form is stronger than her green version, comparable to Grey Hulk. However, like Green Hulk she becomes more savage, speaks in broken sentences, and even calls herself "Puny Jennifer."