The Sentinel is a robot designed to police, fight, and capture mutants. They were designed by Bolivar Trask and Henry Peter Gyrich and built by an enormous Sentinel-looking factory called Master Mold.

Using the disguise of a Mutant Registration Agency, Sentinel creators Bolivar Trask and Henry Peter Gyrich of the NSA used this information to send the Sentinels to kidnap the mutants, believing them to the scum of the Earth.

A living example of the X-Men's worst nightmare, the X-Men attacked the Mutant Control Agency headquarters in hopes of stopping the Sentinels from kidnapping more mutants. They managed to destroy all the files, but their victory came at a great price. Morph was abandoned and Beast was arrested. 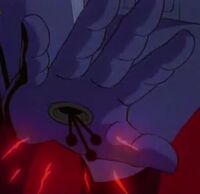 The X-Men later defeated the Sentinels and Master Mold with Magneto's help. They would constantly return to haunt the X-Men.

The X-Men kept a simulation of the Sentinels in the databanks for the Danger Room. Once, Spider-Man found his way into the Danger Room where Gambit had been running the simulation. He and the X-Men fought and defeated the holographic robots.

In an alternate future, the Sentinels took over the planet. They built the extremely powerful Nimrod. These versions were eventually wiped out of existence when Bishop went back in time to stop it.

The Sentinels were voiced by David Fox.

The Sentinels were chosen for the series' first villain for two reasons. First, they were the perfect embodiment of human over-reaction to the discovery of mutants. The other is that they could be destroyed without angering censors, the same for the Spider-Slayers on Spider-Man.[1]