Scott Lang is from the Yost Universe series The Avengers: Earth's Mightiest Heroes.

Scott Lang was a brilliant electrical engineer until he was forced into a life of crime. He later became a superhero, taking on the mantle of the second Ant-Man after Hank Pym. 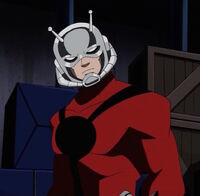 Scott was a highly skilled electrical engineer. However, his daughter Cassie got sick and he was unable to pay for the hospital bills. He began work as a robber under Crossfire. He used the money to heal Cassie, but was arrested and did time. Afterwards he went to work at Grayburn College as a janitor, just wanting a clean life. However, Crossfire thought that he still had all the money and demanded a cut. Since it was used for Cassie's treatments and he had none, Crossfire kidnapped the girl demanding the money. He knew that Dr. Hank Pym was actually the superhero Ant-Man working with the Avengers. He broke into Pym's office, infiltrated the safe, and stole the Ant-Man technology. He tested it out in a lousy hotel where he discovered all the powers. As Ant-Man, he broke into the Federal Hall to steal their money. He used the Pym Discs to shrink the money in mass. However, the money disappeared from existence as the discs were experimental. He robbed another bank, without the discs, but was caught by the Heroes for Hire duo Luke Cage and Iron Fist. He barely managed to escape the two. At his hotel room, the Heroes for Hire and Pym found him. He explained his situation and why he didn't want to involve any authorities. He then escaped once more with the money. He went to Crossfire and gave him the stolen money. Unfortunately, Crossfire thought that Lang was Ant-Man and decided to use his powers to commit more crimes. Just then the Heroes and Pym arrive and fight Crossfire and his goons. Pym helped free Cassie and Lang defeated Crossfire. Pym then allowed him to become the new Ant-Man while he eventually used the name Yellowjacket. Iron Fist then offered him a position on the Heroes for Hire. It is unknown if he took the job or not.

Former S.H.I.E.L.D. director Nick Fury investigated Lang as a possible Skrull in disguise, but he was human.

When Galactus and his heralds came to Earth, Lang helped the Avengers, New Avengers, Fantastic Four, and several other heroes in defending Earth. He was part of the group that stopped Firelord.

Scott Lang is a man who is willing to go to the deep end in order to protect those closest to him. Lang would do anything to save his daughter, so he even resorted to working with Crossfire to save his daughter's life. He also even stole the Ant-Man uniform to save Cassandra.

Cassie is Scott's daughter who was very sick from a rare disease and was on a brink of death, but she got better thanks to her father. She later was kidnapped by Crossfire and was rescued by Scott with the help of Luke Cage, Iron Fist and Hank Pym.

Scott was voiced by Crispin Freeman.

The first animated version of the character.

Retrieved from "https://marvelanimated.fandom.com/wiki/Scott_Lang_(Yost_Universe)?oldid=63642"
Community content is available under CC-BY-SA unless otherwise noted.