For the Spider-Slayer, see Scorpion (Robot).

Mac Gargan, also known as Scorpion, is a supervillain and commonly an enemy to Spider-Man. He has been a member of the Insidious Six.

Little is known about the early life of Mac Gargan. It is known that all his life people picked on him. 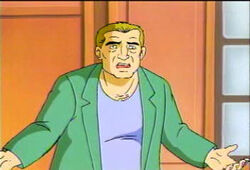 Gargan was a neurotic and overweight private detective working for J. Jonah Jameson. He was hired to discover Spider-Man's real identity.

After failing to find any leads, Jameson decided to use Gargan in an experiment. Working with Dr. Farley Stillwell, his DNA was combined with that of a scorpion, the natural enemy of the spider. Jameson wanted Gargan to become a "hero" by defeating Spider-Man.

Gargan was transformed gaining all new abilities and strength. He fought Spider-Man with Jameson watching. However, before he could unmask the wallcrawler he was overcome with pain. He continued to change. He returned to Stillwell believing that the Neogenic Recombinator could change him back. He then tried to enter a nuclear reactor to change back. Spider-Man appeared and defeated him.

Eventually, the Kingpin broke Scorpion out of prison along with Rhino, Doctor Octopus, Chameleon, Mysterio, and Shocker. Together they formed the Insidious Six. They were tasked with stopping Kingpin's enemies. They captured Spider-Man but discovered it was just Peter Parker pretending to be the hero. They used him to find the real Spider-Man who defeated him.

He became desperate with finding a cure for himself. He kidnapped Stillwell, who destroyed the Recombinator to prevent others like Scorpion from being created.

He eventually met a woman he wanted to marry, Sarah Baker. She convinced him to raise money legally in order to pay for treatment. They believed that once he was cured they could get married.

He heard about Vulture, a man he believed smart enough to cure him. He saved him from an exploding building and kept him hostage in his apartment. However, he and Sara were slow to acquire money. While walking around the city, he was captured unprovoked by Spider-Man, who brought him to Alistair Smythe. Sara released Vulture who agreed to help Scorpion in exchange for Smythe's technology. He later agreed to not commit any more crimes.

It is unknown what happened between Mac and Sara. It is likely they broke up.

Scorpion attacked a bank, during which his assault was responded to by Spider-Man. Though he shot the hero with some of his acid, Spider-Man managed to avoid it. Scorpion continued to fight the masked hero until finally being able to defeat him when he successfully buried him underneath a multitude of collapsing pieces of the ceiling. Scorpion got into the safe by melting the locks on it and saw May Parker, whom he told to hand over her rings. He acknowledged their beauty, citing that they would be great for when he and Sara got married. However, Spider-Man reentered the fray, ready to fight him before the villain used May as a shield to get away.

Eventually, Kingpin reformed the Insidious Six, with Vulture replacing the deceased Mysterio. They went looking for Red Skull's doomsday device. They went to Russia where they were captured by Silver Sable. They were then betrayed by Chameleon, who was Red Skull's adopted son. Chameleon released his adopted father and his adopted brother became Electro. When Chameleon tried to escape with his family, Scorpion grabbed him with his tail and brought him before Kingpin. After S.H.I.E.L.D. captured Kingpin, the remaining Insidious Six went their separate ways.

Scorpion was voiced by Martin Landau in the first two seasons and Richard Moll in the last three. Landau became unavailable after he won an Academy Award for his role in Ed Wood.

"The Sting of the Scorpion" is a rather faithful adaptation of Scorpion's first appearance in the comics.

Scorpion had a dramatically different design at the end of "The Sting of the Scorpion" than he would for the rest of the series, though no in-universe explanation is given.

Mac is short for MacDonald.

Gargan was in fairly good shape before becoming the Scorpion, and had a shaved head rather than blonde hair.

Gargan was hired to see how Peter Parker got pictures of Spider-Man.

He joined the Masters of Evil.

He worked as a mercenary for Justin Hammer.

He got other tails that could shoot tear gas and an electric shock.