Wanda Maximoff, also known as Scarlet Witch and Wanda Frank, is a mutant and member of Force Works and Avengers.

Scarlet Witch is a mutant sorceress who is the daughter of Magneto, and sister of Quicksilver. Sometime after her childhood, Wanda went to study under Agatha Harkness so that she could control her mutant powers through magic. Sometime later, she got a job among Iron Man's Force Works. 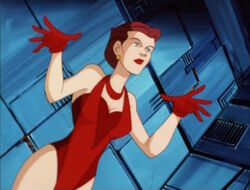 Wanda was romantically interested in Tony and competed with Spider-Woman for his affections.

After the team became upset with Tony's lone wolf attitude, Wanda left the team along with Hawkeye and Century. She returned when the team reformed after Mandarin returned.

Some point later she joined the Avengers while her brother joined X-Factor. 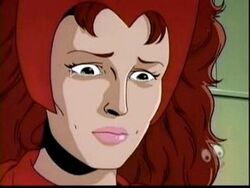 They were called to Wundagore Mountain where they learned that the mutant leader Magneto was their father.

She stayed with the Avengers when Ant-Man took command. She fell in love with Wonder Man. However, he was put into a coma by Ultron. Ant-Man used his brain patterns to make Vision. Vision expressed feelings for Wanda and she seemed to feel the same way but did not want to betray Wonder Man.

Upon seeing how much Wanda loves Wonder Man, he decided to use himself as bait to lure Ultron out. Wanda disapproved because she didn’t want to loose Vision too. Vision went on with the plan anyway. It works, and the Avengers then had Wonder Man's body. They tried many technological means to revive him but none work. 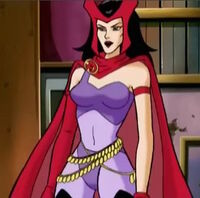 Wanda realized that if technology wouldn't work maybe mysticism would. Wanda and Vision went to Wanda's old mentor Agatha Harkness, but she revealed that a great evil that she must battle was approaching. The evil was Agatha’s son, Nicholas Scratch. Scratch kidnapped his own mother and planned an unfair trial for his mother where she would be sentenced to death. Agatha granted her powers to Wanda so that she could defeat Scratch before he killed her. Wanda also used these powers to revive Wonder Man at last.

Wanda and Wonder Man started to date again after that. However, Wanda still had feelings for Vision. After defeating Zodiac, Wanda told Wonder Man how she felt. He told her that there was only one option, for her to go back to Vision. She and Vision got back together.

Scarlet Witch was voiced by Katherine Moffat in the first season of Iron Man, Jennifer Darling in the second, Susan Roman on X-Men, and Stavroula Logothettis on The Avengers: United They Stand.

Her design on X-Men is the most faithful to the comics, except with a skintight leotard under her costume for modesty reasons.

She has been a member of the Brotherhood of Mutants and Defenders.

Retrieved from "https://marvelanimated.fandom.com/wiki/Scarlet_Witch?oldid=70631"
Community content is available under CC-BY-SA unless otherwise noted.