Scarlet Spider, the secret identity of Ben Reilly believed himself to be a clone of Peter Parker, and did what he could to get out of life. Changing his name to Ben Reilly, he became the Scarlet Spider. He joined several other alternate universe versions of Peter as part of the Spider-Men. 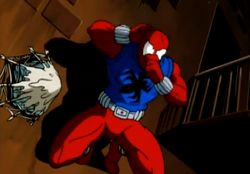 Depending on which of the two were the clone, the Scarlet Spider as Spider-Man lived a life very similar to that of one of his counterparts. Regardless, Spider-Man had it hard in his universe, losing both Aunt May and Uncle Ben. When Miles Warren made a clone of Peter, he tried to stay out of his equal's life by changing his name to Ben Reilly and avoiding Peter. However, his attempts to distance himself from his counterpart proved useless when it was discovered that Peter himself may have been the clone and after Ben became the Scarlet Spider to fight crime and do justice, Peter became even more angered.

Despite this, Ben was unaware of his newfound hostility and went to stop one of Kingpin's plans. Though he was able to adequately defeat most of his henchmen, he was soon joined in fighting them by Spider-Man himself. Though he believed his fellow superhero to be helping him in defeating their shared enemy, Spider-Man had actually come to attack and defeat him, beginning when he turned his focus from the Kingpin's henchmen to him and started to attack Scarlet Spider. As the Kingpin's plans were coming to fruition, the Carnage Symbiote came out of the portal the Kingpin had started and bonded with Spider-Man, creating that of Spider-Carnage and willing him to do unjust things.

What Scarlet Spider did not realize was that Spider Carnage would go on to destroy all multiverses. However after his plans succeeded and the universes started to break, Madame Web and Beyonder felt his involvement and the Beyonder pulled back time to stop him. He and Madame Web saw to it that they would train Spider-Men from across all different reaches of the multiverse, believing that he would only be able to stop himself. Along with them was Scarlet Spider, whom was trained by Madame Web until finally being deemed ready to face Spider-Carnage. Despite this, he was not selected by Madame Web and Beyonder as the leader of the Spider-Men, that instead being one other Spider-Man, whom he met for the first time when the latter was teleported in front of Scarlet Spider and the others after completing that of the Secret Wars.

After removing his mask in front of his counterpart, whom stated that he did not want to even hear his story, Scarlet Spider told the Spider-Man and the others of how he and Spider-Carnage came to be. In the midst of telling his story, he was told by the leading Spider-Man that his situation was starting to sound like a bad comic book plot. After Madame Web and Beyonder told the group what to do, Scarlet Spider and the others went to face off against Spider-Carnage, taking the words of the leading Spider-Man and going through the front door of the building that Spider-Carnage conspired with Kingpin in, suspecting him not to notice them. However, the group was caught on the surveillance camera and reported to the Kingpin, whom questioned one of his guards when he told him that they were five clones when he previously believed there was only one. Shortly after he and the others began to disable the security systems, they were attacked by Green Goblin and Hobgoblin, as well as some additional guards. While fighting them off, he impressed his armored counterpart with his webbing, whom asked him what he called it. After revealing it to be Impact Webbing, the armored Spider-Man questioned himself on why he never thought of making it.

He and the others soon found themselves facing down a multitude of guards while hiding in a vent before his armored counterpart decided to charge them head-on. After his armored counterpart moved ahead, Scarlet Spider discussed him very briefly with his leading counterpart before following him to back up their ally. During the fight, Scarlet Spider was able to dodge a blast of Green Goblin's, causing it to hit the guard he was fighting against. After Green Goblin succeeded in getting to his glider and paralyzing Scarlet Spider's armored counterpart before the latter was teleported away, he and the other two remaining Spider-Men began to flee from the Green Goblin and his glider's blasts and proceeded to web him up along with his six-armed counterpart before continuing on. After finding Kingpin, Alistar Smythe and Spider-Carnage, he dodged a blast fired by Smythe and proceeded to fight him with the others after being helped by Spider-Man when a pipe fell on his back and rendered him unable to move. 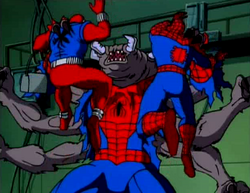 Together, he and Spider-Man were able to easily defeat Smythe, webbing him up almost entirely after grabbing him with their own web shooters. However, their odds of winning soon dimmed when their six-armed counterpart was turned into a Man-Spider after his ongoing mutation disease continued to spread. They were both attacked by him after Spider questioned what had happened to him and Spider-Man explained his transformation and recalled when he had transformed into one as well. It is unknown what would have happened if not for the tampering of Beyonder, who teleported Man-Spider and himself to an alternate dimension.

Even with Spider-Carnage gone, Scarlet Spider knew that he and Spider-Man would have to disable the bomb, it still being powerful to destroy the entirety of reality. However, the two were soon teleported back to Madame Web and congratulated by their mechanical-armed for saving all of reality before Spider-Man lamented that they did it together. However, their battle was not yet over as Spider-Carnage continued to try and get his device operational in the universe of their armored and still paralyzed counterpart. Though he and the others wished to have fought Spider-Carnage again, they were unable to as Madame Web could only send one of them and their leading Spider-Man decided to go. Along with Madame Web and the other Spider-Men, he watched Spider-Man single-handedly defeat Spider-Carnage by using his brain and congratulated him with the others when he returned.

After the ordeal was finished and the nightmare was over, Scarlet Spider and the other Spider-Men sans the leading Spider-Man were sent back to their respective alternate universes.

Unlike the other Spider-Men, the Scarlet Spider did not make jokes while battling and only sought to get his objectives done. This could impart come from his own feelings of guilt over the creation of Spider-Carnage. Though he himself was nowhere near responsible for the latter's hatred in the world or his cloning, he still did his best to leave Spider-Carnage alone back when he was still Spider-Man and only fought him when he attacked him during a mission to stop Kingpin.

Madame Web trained Scarlet Spider for his fight against his counterpart, along with other Spider-Men from alternate universes. He at some point, told her the story of how Spider-Carnage came to be and watched Spider-Man fight Spider-Carnage with her.

Scarlet Spider first met Spider-Man when his universe and all others for that matter were destined to be destroyed by Spider-Carnage. When he took off his mask shortly after first meeting Spider-Man, the latter remarked that he did not even want to hear his story before being told by Madame Web that he would have to, as he was in the Scarlet Spider's universe. He explained his story to Spider-Man, whom remarked that it was starting to sound like a bad comic book plot after hearing off Spider-Carnage growing angry when Curt Connors discovered that it may have in fact been Spider-Carnage who was the clone and not Scarlet Spider himself.

He charged off with Spider-Man to face Spider-Carnage, taking his orders and following them rather efficiently. In turn, Spider-Man helped him when Scarlet Spider had his body caught by a machine part after dodging a blast from Alistar Smythe. He and Spider-Man soon saw their six-armed counterpart transform into a spider-like creature, with Scarlet Spider questioning what he had become before learning of Spider-Man's own previous transformation. The two were grabbed and saved by Beyonder, whom teleported the beast away from them. Scarlet Spider and Spider-Man moved in to aid their powerless counterpart and managed to convince Scarlet Spider's universe's Kingpin that Spider-Carnage was trying to destroy the multiverse.

Scarlet Spider met Spider-Man after his universe fell under peril thanks to Spider-Carnage. During their fight against some of the guards and Green Goblin, the armored Spider-Man asked him what he called his webbing and was impressed by it. Scarlet Spider revealed it to him and made a remark about him after he boldly jumped into enemy fire while the group was ordered by their leading Spider-Man to wait out their attackers.

Ben first met Spider-Carnage as Spider-Man either after he was cloned or when the latter was. Ben initially tried to stay out of Peter's life, changing his hair color and style and taking on a new persona. After Ben became the Scarlet Spider, Peter became even more angered and his rage towards the former's new identity drove him over the edge, ultimately culminating in Spider-Man following him and attacking him while he tried to stop the Kingpin and soon bonded with Carnage Symbiote.

Scarlet Spider fought Green Goblin with the other Spider-Men during the Spider-Wars, where he dodged an attack by the latter when he was able to move out of the way in time and with the rest of his team, succeeded in defeating him.

Though indirectly, Scarlet Spider fought Hobgoblin with the rest of his team of Spider-Men and was able to defeat him.

Ben fought against Alistar with his leading Spider-Man counterpart during the Spider-Wars. He and Spider-Man easily defeated him and webbed him up together before continuing on.

Spider-Man's remark about the Scarlet Spider's story sounding like a bad comic book plot is an in-joke to the reaction to that of the Clone Saga, a highly controversial story arc.

Though it was never revealed within Spider-Man whether Spider-Carnage or Scarlet Spider was the clone a script segment from Spider Wars revealed that Spider-Carnage was in fact the real clone.

In the Fantastic Four episode "Nightmare in Green", Scarlet Spider appears under an overhang watching Rick Jones and Human Torch fly by. This was because at the time of the series' production Ben was the primary Spider-Man and Peter was retired. However, this makes no sense within the Marvel Animated Universe as Ben never appeared in the primary universe. The logical explanation is that at some point Peter wore the Scarlet Spider costume.

It is revealed definitely that Ben is the clone and Peter is the original.

While the Peter and Ben fought, they were not such bitter enemies.

Ben bonded to the Carnage symbiote but was freed by Peter.

His death at the hands of Green Goblin confirmed he was the clone.

Retrieved from "https://marvelanimated.fandom.com/wiki/Scarlet_Spider?oldid=75545"
Community content is available under CC-BY-SA unless otherwise noted.