Walter Langkowski, now known as Sasquatch, is a Gamma-irradiated member of Alpha Flight, and the only non-mutant member. 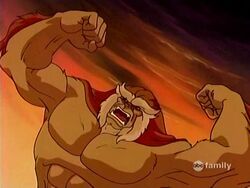 Bruce Banner traveled to Canada in hopes of finding Walter Langkowski, a man who he attended college with. Instead he learned that Langkowski had also made a breakthrough in gamma research and foolishly tested it on himself, randomly turning into the Sasquatch.

After attempting to cure both of them, the experiment suddenly overheated and Banner broke out, to save a small boy who had previously befriended Hulk.

Sasquatch, angry at his now permanent transformation, attacked Hulk, and unintentionally injured the boy. Releasing he was now more monster than man, he separated himself from humanity on an iceberg.

At some point he joined or rejoined Alpha Flight and try to retrieve former member Wolverine.

He was of Polish Jewish origin.

He was a professor of both physics and biophysics at McGill University.

Langkowski willingly became Sasquatch since he wanted to be like Hulk. He bombarded himself with a gamma ray projector at his laboratory near the Arctic Circle.

Langkowski's transformation into Sasquatch was triggered by willpower.

It was not the gamma rays that turned him into Sasquatch, but the fact that his lab equipment opened a doorway between real world and the "Realm of Great Beasts".

Retrieved from "https://marvelanimated.fandom.com/wiki/Sasquatch?oldid=89625"
Community content is available under CC-BY-SA unless otherwise noted.