Sabretooth is from the Christopher Yost Animated Universe.

Sabretooth is a mutant, supervillain, member of Team X, and archenemy to Wolverine.

Sabretooth was a member of Team X as part of the Weapon X program, along with Wolverine who escaped. He and the other Team X members tried to capture Bruce Banner to control the Hulk but the green giant escaped and nearly killed him. He later attempted to bring Wolverine back to Weapon X without success. 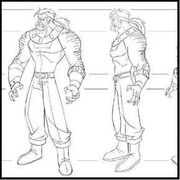 Concept art was created for the character's Age of Apocalypse version. It was released with Archangel, Weapon X, Holocaust, Colossus, Sunfire, Cyclops, and Magneto. In the comics, this version was a hero and leader of the X-Men.

His name is Victor Creed, but this was not specified.

Retrieved from "https://marvelanimated.fandom.com/wiki/Sabretooth_(Yost_Universe)?oldid=88460"
Community content is available under CC-BY-SA unless otherwise noted.