The Supreme Headquarters, International Espionage, Law-Enforcement Division, or just S.H.I.E.L.D., is a military organization in the United States of America. They are based out of the Helicarrier that hovers over New York City and led by Nick Fury.

The exact history of the organization is unknown.

At some point, they became aware that the Chameleon was going to assassinate world leaders at the United Nations. Fury recruited J. Jonah Jameson to help. Spider-Man became involved and stopped the terrorist.

They later arrested Chameleon again after he and Richard Fisk framed Peter Parker for treason. 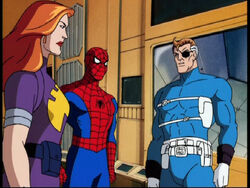 However, the Kingpin had implanted Chameleon with the technology to monitor what Chameleon saw. He had been in a cell next to John Hardeski, who had memorized the Captain America Super Soldier Serum. Kingpin and Doctor Octopus attacked the Helicarrier to free Hardeski. They later found Hardeski on the roof, as if waiting to be captured. 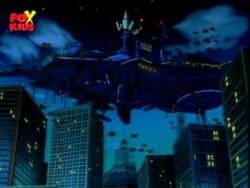 The group tried to stop the Insidious Six from activating Red Skull's doomsday weapon. Red Skull's son became Electro because of the device. S.H.I.E.L.D. attacked Electro but was nearly destroyed.

The team also worked with Iron Man. A.I.M. cloned Walter Stark and tried to convince his son Tony that S.H.I.E.L.D. was actually behind Walter's "faked" death.

Dum Dum Dugan helped Iron Man fight Crimson Dynamo, though a nuclear reactor ended up going off. This eventually resulted in the Armor Wars. Nick Fury tried to stop Iron Man from attacking other heroes, but in a battle with Firepower Iron Man was apparently killed. 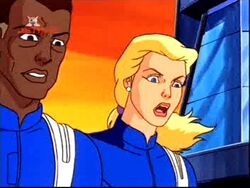 Agent Gabriel Jones was sent to Gamma Base to work with the Hulkbusters.

After the disappearance of John Jameson's shuttle, Fury watched over the next shuttle's launch. Spider-Man, reappearing after apparently being killed, appeared and Fury let him take the shuttle to Counter-Earth to save John.

Agent X is original to Spider-Man. Though she could be based on Black Widow who has been portrayed as a member of S.H.I.E.L.D. and right-hand woman to Nick Fury.